Nate Silver on the Statistical State of the Presidential Race 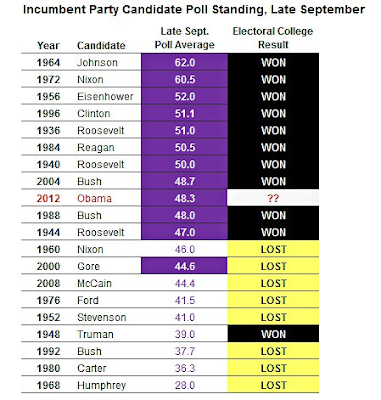 Nate Silver has a new piece in the New York Times that suggests that despite the blatantly untrue ads being put up by the Romney campaign and Karl Rove's sleazy American Crossroads PAC, Barack Obama is within the margin where past candidates with similar rankings have gone on to win the presidency.  I do NOT want anyone to get complacent, but it is encouraging to see that the Romney/Ryan ticket may be doomed.  Personally, I want the GOP to be defeated by the largest margin possible.  Only continued resounding defeats will force the GOP to reform itself and sent the Christianists and the Tea Party back to the political wilderness where they rightly belong.  Here are highlights from Nate's piece:

With fewer than 45 days left in the presidential campaign, it’s no longer a cliché to say that every week counts. And there are a few polling-related themes we’ll be watching especially closely this week.

This is probably about the last week, for instance, in which Mitt Romney can reasonably hope that President Obama’s numbers will deteriorate organically because of a convention bounce. That is not to say that Mr. Obama’s standing could not decline later on in the race, for any number of reasons. But if they do, it will probably need to be forced by Mr. Romney’s campaign, or by developments in the news cycle, not the mere loss of post-convention momentum.

let’s consider a more basic question. What did the polling look like at this stage in past elections, and how did it compare against the actual results?

Our polling database contains surveys going back to 1936. The data is quite thin (essentially just the Gallup national poll and nothing else) through about 1968, but it’s nevertheless worth a look.

In the table below, [above] I’ve averaged the polls that were conducted 40 to 50 days before the election in each year — the time period that we find ourselves in now. (In years when there were no polls in this precise time window, I used the nearest available survey.)

The table considers the race from the standpoint of the incumbent party (designated with the color purple) and the challenging party (wearing the orange jerseys), without worrying about whether they were Democrats or Republicans. Mr. Obama’s position, for instance, is probably more analogous to that of the Republican incumbent George W. Bush in 2004 than it is to the candidate from his own party that year, John Kerry.

There has not been any tendency, at least at this stage of the race, for the contest to break toward the challenging candidate.

Nate has a lot more, so read the entire article.
Posted by Michael-in-Norfolk at Monday, September 24, 2012