Watching the seemingly faltering Romney/Ryan campaign and the Roman Catholic bishops' efforts to endorse Romney is like watching a train wreck in slow motion.    I'm sure Romney believed that by selecting Paul Ryan who was parroting the anti-woman, anti-gay, and anti-contraception mantra of the Catholic bishops he would lock up the Catholic vote.  The latest polls show that the exact opposite is in fact happening.  So what do the Catholic bishops - or at least some of them - do?  They, in the person of Bishop Thomas John Paprocki (pictured below), issue a statement that a vote for Barack Obama may subject one's soul to eternal damnation.  First these thoughts from Andrew Sullivan on the flight of Catholics from the Romney/Ryan ticket:

National Catholic Reporter finds something remarkable in a new poll from Pew:

Obama's total Catholic vote against McCain was where he is now: 54 percent. But Romney has only 39 percent compared with McCain's 45.

A small word of thanks to Cardinal Dolan, Robert George and K-Lo for helping shift the Catholic vote massively toward Obama with their summer campaign for religious liberty. And special thanks to Paul Ryan. No actual Catholic could ever find anything but puerile cruelty in the works of Ayn Rand, or rally to the idea that home-care for the elderly should be sacrificed to reduce tax rates for the super-rich. Paul Ryan believes that the basic principles of Rand can be compatible with Catholicism. American Catholics are just not that dumb or confused about their faith.

The poll, though just released, was conducted on September 16. The polls have shifted slightly in his favor since. The 47 percent tape - about as anathema to Catholic social teaching as is possible to express in its contempt for the poor - cannot have helped.


Catholics may not be as dumb as Romney and Ryan think they are, but the Catholic bishops continue to view their flock as complete cretins.   As noted above, faced with a flight of Catholics to Obama, the Catholic bishops apparently plan on scaring would be Obama voters by saying that they will be damned to Hell if the pull the Democrat lever.  Here are highlights from Raw Story on this insane batshitery:

A Catholic bishop from Springfield, Illinois is warning that the stakes for the 2012 election are even higher than most people think because voting for President Barack Obama could damn “you own soul” to hell.
In a column and video posted by the official newspaper of the Diocese of Springfield in Illinois and obtained by Right Wing Watch on Wednesday, Bishop Thomas John Paprocki called out the Democratic Party for temporarily removing God from their platform, supporting abortion and recognizing that “gay rights are human rights.”

“There are many positive and beneficial planks in the Democratic Party Platform, but I am pointing out those that explicitly endorse intrinsic evils,” the bishop explained. “My job is not to tell you for whom you should vote. But I do have a duty to speak out on moral issues. I would be abdicating this duty if I remained silent out of fear of sounding ‘political’ and didn’t say anything about the morality of these issues. People of faith object to these platform positions that promote serious sins.”

“So what about the Republicans? I have read the Republican Party Platform and there is nothing in it that supports or promotes an intrinsic evil or a serious sin,” Paprocki added.

“Again, I am not telling you which party or which candidates to vote for or against,” he concluded, “but I am saying that you need to think and pray very carefully about your vote, because a vote for a candidate who promotes actions or behaviors that are intrinsically evil and gravely sinful makes you morally complicit and places the eternal salvation of your own soul in serious jeopardy.”


I can only wonder how many sexual predator priests Paprocki has enabled or protected.  Where is the IRS?  The Catholic Church needs to lose its tax exempt status NOW. 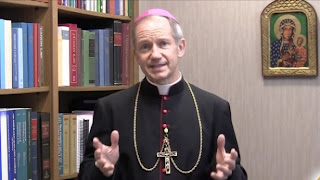