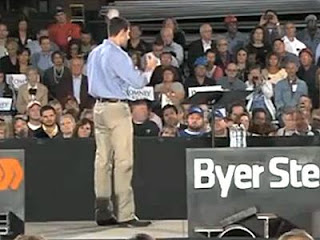 I noted this morning how Paul Ryan has renewed his attacks on contraception.  Now, he's renewed his attacks on gay marriage in particular (Ryan did surprisingly oppose a reinstatement of DADT).  I guess that's what one does to rally the Christofascists and the gay haters in the GOP base.  Meanwhile, of course, polling has shown that a slim majority of Americans favor same sex marriage.  Ryan must be focused on accelerating the GOP's death spiral in the face of large majorities of younger voters supporting gay rights.  The Advocate looks at Ryan's denigration of gays and our relationships.  Here are some excerpts:


Mitt Romney's running mate Paul Ryan was asked about his stance on marriage equality at a rally, where he suggests that only heterosexual marriage is an American value.

"The things you talk about like traditional marriage and family and entrepreneurship -- these aren’t values that are indicative to any one person, or race, or creed, or color," Ryan said. "These are American values, these are universal human values."

I'll be blunt.  Ryan is a nasty bigoted asshole.  Oh, and let's not forget that he's the architect of the GOP plan to dismantle the social safety net and Medicare should the party win the White House and the House of Representatives.
Posted by Michael-in-Norfolk at Wednesday, September 26, 2012