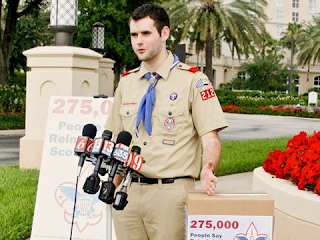 Once again anti-gay bigotry is being shown to have a price.  While the Boy Scouts maintain that they area private organization and can discriminate against gays if they so choose, they are discovering that other enterprises have a similar right to decide what organizations they will help fund and which ones they will not.  In the wake of the Boy Scouts conscious decision to remain hostile to gay scouts and gay troop leaders, Intel - heretofore the largest donor to the Boy Scouts - has announced that it will no longer be funding the Boy Scouts and that the Scouts will be taking a $700,000 hit to its finances.  I applaud Intel's action and hope than more corporate donors will follow suit.   Yes, the Boy Scouts do do some good things.  But sadly, they are also sending a message that bigotry and prejudice are acceptable attributes.  Boys and young men do not need to be receiving this insidious message.  Here are highlights from the New Civil Rights Movement:

The Boy Scouts have just lost their largest corporate donor over their unrelenting insistence to exclude — and even expel — from all levels any gay, bisexual, or transgender man, teen, or boy. Intel (NASDAQ: INTC), the $54 billion multinational semiconductor chip maker that powers most computers, has announced they recently ceased funding the century-old Scouting organization, to which it donated$700,000 annually.

GLAAD announced that on Wednesday, Eagle Scout Zach Wahls, founder of Scouts for Equality, launched a campaign on Change.org supported by GLAAD and signed by more than 30,000 Americans urging Intel to pull funding from the Boy Scouts of America after an American Independent report revealed that the company gave nearly $700,000 to the Boy Scouts in 2010.”


According to the American Independent, the Intel Foundation has a policy that it will not fund “organizations that discriminate on the basis of race, color, national origin, gender, sexual orientation, veteran or disability status.”

Intel made their announcement yesterday.

“Intel joins current Boy Scouts of America Board Members, President Obama, Mitt Romney and hundreds of thousands of Americans in speaking out against the BSA’s practice of unfairly kicking out gay scouts and scout leaders simply because of who they are,” GLAAD President Herndon Graddick said in a statement. ”All of the great work that the BSA does to help young people will continue to be overshadowed by their blatant discrimination until they join other inclusive national organizations like the Girl Scouts of the USA and the 4-H Club. The time is now for the BSA to side with fairness, otherwise they will continue to see sponsors and scouting families drop their support.”

Posted by Michael-in-Norfolk at Saturday, September 22, 2012