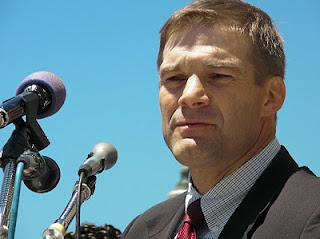 As if there isn't more than enough reason for LGBT voters to oppose the Romney/Ryan ticket and Congressional Republicans, now GOP Congressman Jim Jordan (pictured above and a certifiable nutcase in my view) has announced that if Romney wins the White House, Jordan and his cohorts in the ultra-conservative Republican Study Committee - a group of more than 160 Republican House members - are going push to reinstate DADT.  And what of LGBT members of the U. S. military who have "come out" since DADT repeal?  They'd be forced out.  Think Progress looks at the situation.  Here are highlights:

In an interview with ThinkProgress at the Values Voters Summit on Friday, Rep. Jim Jordan (R-OH) said he “certainly” supports “going back to the previous policy” of Don’t Ask, Don’t Tell. He left open the possibility that those service-members who have already come out of the closet, like Brig. General Tammy Smith, would be discharged from the military if Don’t Ask, Don’t Tell is reinstated.

Though first elected in 2006, Jordan is no back-bencher. He chairs the conservative Republican Study Committee, a group of more than 160 Republican congressmen dedicated to pushing conservative causes that wields major influence within the GOP caucus.

If Jordan were to ask the military about reinstating DADT as he suggests, he would learn that the Pentagon believes that last year’s repeal was actually beneficial for unit morale, and that none of the concerns expressed by opponents of the decision have come to fruition. In addition, there was considerable support for lifting the ban on openly gay and lesbian people serving in the military from the heads of three of the four branches of the military even before DADT was repealed.

Chairman of the House Armed Services Committee Rep. Buck McKeon (R-CA) has previously indicated that he would not like to see Republicans bring up Don’t Ask, Don’t Tell, but his opposition may not be enough to stop Jordan and the Republican Study Committee from reinstating the policy if the GOP prevails in November.


Given Jordan's obsession with LGBT issues, one has to wonder how soon before he's caught in a wide stance situation like Larry Craig or caught seeking gay hook ups like former 2nd Congressman Ed Schrock.
Posted by Michael-in-Norfolk at Tuesday, September 18, 2012