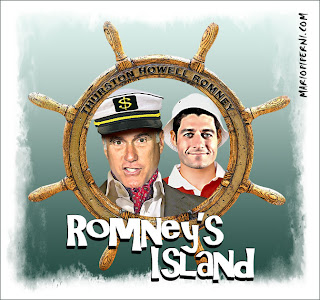 I realize that I've already beaten up on Mitt Romney's incredibly contemptuous statements on 47% of the American population, but conservative columnist David Brooks' column in the New York Times entitled "Thurston Howell Romney" is simply too good to pass up. I generally disagree with most of Brooks' positions and views, but today his analysis was spot on.  It's pretty bad when even conservative columnists are piling on and bashing Romney for his greed, insensitivity and stupidity.  In my view, they simply finally realized that Romney is a self-centered, arrogant bastard who thinks he's entitled to be president simply because he wants to be president.  Here are some excerpts:


There are sensible conclusions to be drawn from these facts. You could say that the entitlement state is growing at an unsustainable rate and will bankrupt the country. You could also say that America is spending way too much on health care for the elderly and way too little on young families and investments in the future.
But these are not the sensible arguments that Mitt Romney made at a fund-raiser earlier this year.
Forty-seven percent of the country, he said, are people “who are dependent upon government, who believe they are victims, who believe the government has a responsibility to take care of them, who believe they are entitled to health care, to food, to housing, to you name it.”


This comment suggests a few things. First, it suggests that he really doesn’t know much about the country he inhabits. Who are these freeloaders? Is it the Iraq war veteran who goes to the V.A.? Is it the student getting a loan to go to college? Is it the retiree on Social Security or Medicare?

It suggests that Romney doesn’t know much about the culture of America. Yes, the entitlement state has expanded, but America remains one of the hardest-working nations on earth. Americans work longer hours than just about anyone else.

The people who receive the disproportionate share of government spending are not big-government lovers. They are Republicans. They are senior citizens. They are white men with high school degrees. As Bill Galston of the Brookings Institution has noted, the people who have benefited from the entitlements explosion are middle-class workers, more so than the dependent poor.

The final thing the comment suggests is that Romney knows nothing about ambition and motivation. The formula he sketches is this: People who are forced to make it on their own have drive. People who receive benefits have dependency.   But, of course, no middle-class parent acts as if this is true.

[A]s a description of America today, Romney’s comment is a country-club fantasy. It’s what self-satisfied millionaires say to each other. It reinforces every negative view people have about Romney.

He’s running a depressingly inept presidential campaign. Mr. Romney, your entitlement reform ideas are essential, but when will the incompetence stop?

Brooks is in good company in bashing Romney.  Peggy Noonan has slammed Romney in the Wall Street Journal :

What should Mitt Romney do now? He should peer deep into the abyss. He should look straight into the heart of darkness where lies a Republican defeat in a year the Republican presidential candidate almost couldn’t lose. He should imagine what it will mean for the country, for a great political philosophy, conservatism, for his party and, last, for himself. He must look down unblinkingly.

[H]is comments released last night and made months ago at the private fundraiser in Boca Raton, Fla. Mr. Romney has relearned what four years ago Sen. Barack Obama learned: There’s no such thing as private when you’re a candidate with a mic. There’s someone who doesn’t like you in that audience. There’s someone with a cellphone.

This is not how big leaders talk, it’s how shallow campaign operatives talk: They slice and dice the electorate like that, they see everything as determined by this interest or that. They’re usually young enough and dumb enough that nobody holds it against them, but they don’t know anything. They don’t know much about America.

We are a big, complicated nation. And we are human beings. We are people. We have souls. We are complex. We are not data points. Many things go into our decisions and our political affiliations.
You have to be sophisticated to know that. And if you’re operating at the top of national politics, you’re supposed to be sophisticated.

As for those workers who don’t pay any income taxes, they pay payroll taxes—Social Security and Medicare. They want to rise in the world and make more money. They’d like to file a 1040 because that will mean they got a raise or a better job.   They too are potential Romney voters, because they’re suffering under the no-growth economy.

So: Romney’s theory of the case is all wrong. His understanding of the political topography is wrong.

Posted by Michael-in-Norfolk at Tuesday, September 18, 2012