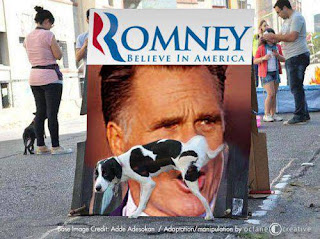 Some are predicting a GOP civil war thanks to Mitt Romney's hapless campaign.  And the brickbats from the thinking, rational members of the GOP pundit class that haven't already fled the party continues to be relentless.  I noted recently Peggy Noon's bashing of Romney who she described as a cyborg.  Well, she's back with another column in the Wall Street Journal that continues her assault on Romney.  Here are some highlights:

[H]ere's one tough, cool-eyed report on what is happening in the presidential race. It's from veteran Republican pollster, now corporate strategist, Steve Lombardo of Edelman public relations in Washington. Mr. Lombardo worked in the 2008 Romney campaign. He's not affiliated with any candidate. This is what he wrote Thursday morning, and what he sees is pretty much what I see.

"The pendulum has swung toward Obama." Mitt Romney has "a damaged political persona." He is running behind in key states like Ohio and Virginia and, to a lesser extent, Florida. The president is reversing the decline that began with his "You didn't build that" comment. For three weeks he's been on a roll. The wind's at his back.  How did we get here? What can turn it around?

1. Mr. Romney came out of the primaries "a damaged and flawed candidate." Voters began to see him as elitist, rich, out of touch. "Here the Democrats' early advertising was crucial." Newt Gingrich hurt too, with his attacks on Bain.

2. The Democrats defined Mr. Romney "before he had a chance to define himself." His campaign failed in "not doing a substantial positive media buy to explain who Mitt Romney is and what kind of president he might be."

3. "Perceptions of the economy are improving." Unemployment is high, but the stock market has improved, bringing 401(k)s with it.

4. Obama's approval ratings are up five to six points since last year. He is now at roughly 49% approval, comparable to where President Bush was in 2004.

5. "The president had a strong convention and Romney a weak one." The RNC failed "to relaunch a rebranded Romney and create momentum."

6. Team Romney has been "reactive," partly because of the need for damage control, but it also failed to force the Obama campaign to react to its proposals and initiatives.

7. The "47%" comment didn't help, but Mr. Romney's Libya statement was a critical moment. Team Romney did not know "the most basic political tenet of a foreign crisis: when there is an international incident in which America is attacked, voters in this country will (at least in the short term) rally around the flag and the President. Always. It is stunning that Team Romney failed to recognize this."

The Romney campaign has to get turned around. This week I called it incompetent, but only because I was being polite. I really meant "rolling calamity." A lot of people weighed in, in I suppose expected ways: "Glad you said this," "Mad you said this." But, some surprises. No one that I know of defended the campaign or argued "you're missing some of its quiet excellence." Instead there was broad agreement with the gist of the critique—from some in the midlevel of the campaign itself, from outside backers and from various party activists and officials.

There were wistful notes from the Republicans who'd helped run previous campaigns, most of whom could be characterized as serious, moderate conservatives, all of whom want to see Mr. Romney win  .   .   .   but they're in despair at the Romney campaign.

Posted by Michael-in-Norfolk at Saturday, September 22, 2012