The Plight of Gays in Iran (and the Islamic World) 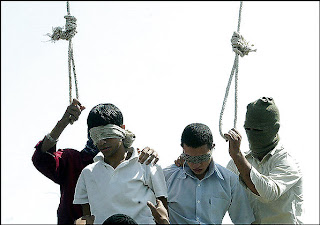 WARNING; Graphic photos.  Yesterday I received an e-mail from filmmaker Wajahat Ali Abbasiwho is seeking funding on Kickstarter for a movie that will highlight the plight of gays in Iran with focus on the government backed hanging of two gay teens in 2005.  While the movie's focus is on Iran, the problem is much larger and is occurring under the U.S. Puppet government in Baghdad.  Indeed the problem of government sponsored murder of gays exists across most of the Islamic world where fundamentalists cling to the seventh century ignorance and limited knowledge of the Koran - much like fundamentalist Christians who seek to govern the world based on the writings of ignorant herders from 3,000+ years ago in Israel.  Only by exposing the problem can sufficient international pressure be brought to bear to end these cruel and senseless deaths.  Here are some highlights of what the movie seeks to accomplish:

Filmmaker Wajahat Ali Abbasi is gearing up to make the feature film “Sin”, inspired by a true incident where two boys were hanged to death because they were in love. This brutal, public killing took place In July 2005 witnessed by thousands of people in Iran. Pictures and videos of this incident were uploaded on the internet by spectators, but the Iranian government and media denied its occurrence.

Wajahat, through the cinema screen, will bring the tragic tale of these boys to life, while addressing an important question why in some societies people are denied the right to life because of their sexual orientation.

While Iran is in total denial of the existence of homosexuality like many countries in the world, it will be interesting to see the world’s reaction to this controversial movie and how it will impact global public opinion on this issue.

‘Sin’ will be shot in English with a few words of Persian. Dubbed versions in Persian, Spanish, French, Chinese, Hindi and Arabic will also be made so that this story can reach out to larger audiences worldwide.

The imagines in this post are truly horrible - as is what is being done to gays daily in far too many countries, often in African nations with the aid and incitement of American Christianists.  Just as frightening is the fact that some Christian Dominionists in America support the execution of LGBT citizens.  Religious based bigotry and extremism that rejects modernity and modern knowledge and which dehumanizes others simply because they are different is a cancer on the world.  It needs to be eradicated just like any disease or plague. 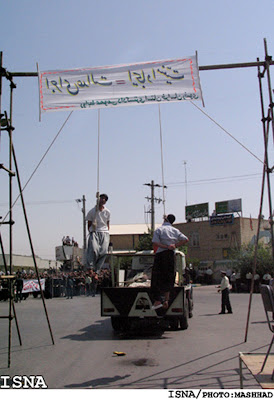 Posted by Michael-in-Norfolk at Wednesday, September 19, 2012