Greed and Debt: The True Story of Mitt Romney 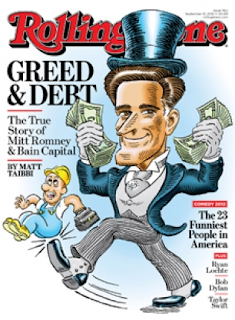 I often book mark new stories with a plan to come back and read them and perhaps write about them.  Sometimes, however, they get lost in the shuffle and I either forget about them or come across them later.  One such article was one in Rolling Stone that did a great job looking at the real Mitt Romney and what motivates the man.  As the title to this post indicates, it was not a flattering story and it only reinforces my already negative views of the man.  It also gets in some well deserved shots at Paul Ryan, who seems to have a similar lack of compassion when it comes to the less fortunate. It's a very long article that deserves a full read.  Here are some article highlights:

The great criticism of Mitt Romney, from both sides of the aisle, has always been that he doesn't stand for anything.   .   .   .   .   The critics couldn't be more wrong.

Mitt Romney is no tissue-paper man. He's closer to being a revolutionary, a backward-world version of Che or Trotsky, with tweezed nostrils instead of a beard, a half-Windsor instead of a leather jerkin. His legendary flip-flops aren't the lies of a bumbling opportunist – they're the confident prevarications of a man untroubled by misleading the nonbeliever in pursuit of a single, all-consuming goal.

The incredible untold story of the 2012 election so far is that Romney's run has been a shimmering pearl of perfect political hypocrisy, which he's somehow managed to keep hidden, even with thousands of cameras following his every move. And the drama of this rhetorical high-wire act was ratcheted up even further when Romney chose his running mate, Rep. Paul Ryan of Wisconsin – like himself, a self-righteously anal, thin-lipped, Whitest Kids U Know penny pincher who'd be honored to tell Oliver Twist there's no more soup left. By selecting Ryan, Romney, the hard-charging, chameleonic champion of a disgraced-yet-defiant Wall Street, officially succeeded in moving the battle lines in the 2012 presidential race.

Last May, in a much-touted speech in Iowa, Romney used language that was literally inflammatory to describe America's federal borrowing. "A prairie fire of debt is sweeping across Iowa and our nation," he declared. "Every day we fail to act, that fire gets closer to the homes and children we love."

And this is where we get to the hypocrisy at the heart of Mitt Romney.   .   .   .   .  But what most voters don't know is the way Mitt Romney actually made his fortune: by borrowing vast sums of money that other people were forced to pay back. This is the plain, stark reality that has somehow eluded America's top political journalists for two consecutive presidential campaigns: Mitt Romney is one of the greatest and most irresponsible debt creators of all time. In the past few decades, in fact, Romney has piled more debt onto more unsuspecting companies, written more gigantic checks that other people have to cover, than perhaps all but a handful of people on planet Earth.

That same man then runs for president riding an image of children roasting on flames of debt, choosing as his running mate perhaps the only politician in America more pompous and self-righteous on the subject of the evils of borrowed money than the candidate himself. If Romney pulls off this whopper, you'll have to tip your hat to him: No one in history has ever successfully run for president riding this big of a lie.

Four years ago, the Mitt Romneys of the world nearly destroyed the global economy with their greed, shortsightedness and – most notably – wildly irresponsible use of debt in pursuit of personal profit. The sight was so disgusting that people everywhere were ready to drop an H-bomb on Lower Manhattan and bayonet the survivors. But today that same insane greed ethos, that same belief in the lunatic pursuit of instant borrowed millions – it's dusted itself off, it's had a shave and a shoeshine, and it's back out there running for president.


Instead of building new companies from the ground up, we took out massive bank loans and used them to acquire existing firms, liquidating every asset in sight and leaving the target companies holding the note. The new borrow-and-conquer economy was morally sanctified by an almost religious faith in the grossly euphemistic concept of "creative destruction," and amounted to a total abdication of collective responsibility by America's rich, whose new thing was making assloads of money in ever-shorter campaigns of economic conquest, sending the proceeds offshore, and shrugging as the great towns and factories their parents and grandparents built were shuttered and boarded up, crushed by a true prairie fire of debt.

Here's how Romney would go about "liberating" a company: A private equity firm like Bain typically seeks out floundering businesses with good cash flows. It then puts down a relatively small amount of its own money and runs to a big bank like Goldman Sachs or Citigroup for the rest of the financing. (Most leveraged buyouts are financed with 60 to 90 percent borrowed cash.) The takeover firm then uses that borrowed money to buy a controlling stake in the target company, either with or without its consent.

But here's the catch. When Bain borrows all of that money from the bank, it's the target company that ends up on the hook for all of the debt.   .   .   .   .   With all that new debt service to pay, the company's bottom line is suddenly untenable: You almost have to start firing people immediately just to get your costs down to a manageable level.

Once all that debt is added, one of two things can happen. The company can fire workers and slash benefits to pay off all its new obligations to Goldman Sachs and Bain, leaving it ripe to be resold by Bain at a huge profit. Or it can go bankrupt – this happens after about seven percent of all private equity buyouts – leaving behind one or more shuttered factory towns. Either way, Bain wins. By power-sucking cash value from even the most rapidly dying firms, private equity raiders like Bain almost always get their cash out before a target goes belly up.

There's much more to the article.  And none of it is good and shows the foul, disgusting way that Romney and his fellow vulture capitalists made their millions.  As for the laid off workers and shuttered factories, Romney sadly doesn't give a damn.  He made his money and then moved on to the next targeted company where he would again pillage the company leaving unemployment and devastated localities in his wake.  It's a shame that more has not been done to expose just how foul Romney has been and just how many thousands of the unemployed can thank Mitt Romney for their dire straits.