Nicholas Kristof on Romney and Moochers: It Takes One to Know One 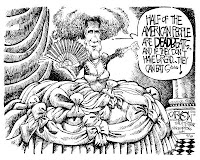 Yet another thinking conservative is slamming Mitt Romney for his callousness and open contempt for nearly half of the nation's citizenry.  This time it's Nicholas Kristof who has less than kind words for Romney and who intimates that Romney himself is a moocher in a column in the New York Times.  While it is hard to know what Romney really believes given his willingness to say anything to pander to whoever he's speaking to at a given moment, I suspect in his remarks to the millionaire crowd at the Boca Raton fundraiser we got a glimpse of the real Romney and it was ugly.  Here are excerpts from Kristof's column:

As I watched a video of Mitt Romney scolding moochers suffering from a culture of dependency, I thought of American soldiers I’ve met in Afghanistan and Iraq. They don’t pay federal income tax while they’re in combat zones, and they rely on government benefits when they come back.

Even if they return unscathed, most will never pay lofty sums in federal income taxes. No, all they offer our nation is their lives, while receiving government benefits — such as a $100,000 “death gratuity” to their wives or husbands when killed.

Maybe I’m being unfair, for I’m sure that when Romney complained in that video about freeloaders, he didn’t mean soldiers. But the 47 percent (more accurately, 46 percent) of American families whom he scorned because they don’t pay federal income taxes includes many other modestly paid workers or retirees who have contributed far more meaningfully to America than some who can shell out $50,000 to attend a fund-raiser like the one where Romney spoke in May.

What about the underpaid kindergarten teacher in an inner-city school? What about young police officers and firefighters? What about social workers struggling to help abused children?


One lesson is the narcissism of many in today’s affluent class.  .   .   .   .    While self-pitying Republicans focus on federal income taxes (mostly paid by the rich), what’s more relevant is the overall tax bill — including state, local and federal taxes of all kinds. According to Citizens for Tax Justice, the majority of American families pay more than one-quarter of incomes in total taxes — and that may be more than Romney pays.

The furor also reflects the central political reality today: the Republican Party has moved far, far to the right so that, on some issues, it veers into extremist territory.  Jeb Bush noted earlier this year that even conservative icons like President Ronald Reagan wouldn’t fit easily into today’s Republican Party.

Another illustration of radicalizing self-delusion comes when the son of a governor and corporate chief executive says that “everything that Ann and I have, we earned the old-fashioned way, and that’s by hard work.”

Posted by Michael-in-Norfolk at Thursday, September 20, 2012