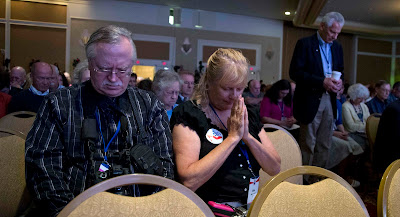 The immediately prior post looked at the fear of modernity and sense of being threatened by the modern world which ultimately underlies much of the unrest in the Arab world.  The post also drew parallels between Christian and Islamic fundamentalists.  A piece in Politico looks at the fear that is driving social conservatives to Mitt Romney.  Why? Because in their minds Obama represents a changing world and changing knowledge that ranges from the human genome project that proves that Adam and Eve never existed (hence no Fall and no need for a Messiah) to understanding that homosexuality is a natural and normal condition.  All of this scares the living Hell out of these knuckle dragging Neanderthals who are terrified to think for themselves and accept that their pastors and priest have been selling them a false bill of goods.  In contrast, Romney promises to try to roll back time and allow them to continue to exist in a fantasy world even at the expense of their own economic well being.  Oh, and let's not forget the sad reality that the GOP has become the party of white supremacists who cannot tolerate that Obama is not white.  Here are article highlights:

Fear of President Barack Obama — not enthusiasm for Mitt Romney — is driving religious conservatives to pull the lever for the GOP nominee this November.

Romney — a former Massachusetts governor who came late to the anti-abortion rights cause — was never a favorite of evangelical voters during the Republican primaries, and their love for him hasn’t grown much now that he has officially become their party’s standard bearer, as judged by interviews with two dozen conservatives at the Values Voter Summit in Washington this weekend.

But religious conservatives will support Romney because Obama — who endorsed same-sex marriage earlier this year — is anathema to them.

“It’s not excitement, it is fear — fear of the other guy,” said Dolores Taylor, 69, of West Harrison, N.Y., explaining why she will vote for Romney over Obama in November. “Excited doesn’t seem to be the right word — I’d say energized, because I’m so angry about what’s going on.”

Jackie Lewis, a woman from Ashburn, Va., echoed those sentiments, calling the motivating factor behind her decision to back Romney “total fear”of the incumbent.  “We can’t take four more years of this,” she said.

Conservatives attending the conference said they worried about a range of things during a possible Obama II, from implementation of the president’s health care law, and a move to what they saw as more “socialist” policies to the end of the very values — including the protection of life and traditional marriage — that they came to the summit to support.

Asked who they supported during the GOP primaries, the majority of those interviewed named someone other than Romney. Many were early supporters of Rick Santorum or Michele Bachmann, both of whom spoke at the conference, though they all say they’re backing Romney now that he’s the nominee.

In a CNN poll released last week, 48 percent of Romney supporters said their vote was for Romney, while 47 percent said they were voting for him as a vote against Obama.


In many ways, these people are little different than the Muslims rioting against the USA around the Arab world.  The real enemy for these people is change and modernity and Romney has been only too happy to pander to their Neanderthal mindset.  These dim wits fail to grasp that the world WILL change and that they are fighting losing rear guard battle.

Posted by Michael-in-Norfolk at Sunday, September 16, 2012