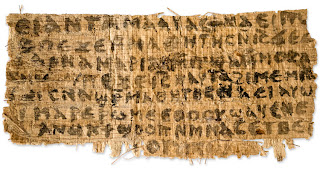 Translated legible text
* not [to] me. My mother gave to me li[fe]
* The disciples said to Jesus
* deny. Mary is worthy of it
* Jesus said to them, “My wife
* she will be able to be my disciple
* Let wicked people swell up
* As for me, I dwell with her in order to
* an image
Expect the spittle to begin flying and the whining to start both at the Vatican and within fundamentalist Christian circles - i.e., among those who either in my view foolishly believe the Bible is inerrant and/or close their minds to the reality that the Bible doesn't tell the true or whole story of the early Church.  Why the new eruption?  A historian of early Christianity at Harvard Divinity School has identified a papyrus fragment in Coptic that she says contains the first known statement saying explicitly that Jesus was married. The fragment also refers to a female disciple.  True, the find is not definitive on the issues, but it does suggest that the early Catholic Church failed to destroy all writings that did not support the story line of the winning factions.  The same story line that is cited to support the Catholic Church's ban on female priests, not to mention later in time priestly celibacy.  The New York Times has coverage and here are some excerpts:

CAMBRIDGE, Mass. — A historian of early Christianity at Harvard Divinity School has identified a scrap of papyrus that she says was written in Coptic in the fourth century and contains a phrase never seen in any piece of Scripture: “Jesus said to them, ‘My wife …'”

The faded papyrus fragment is smaller than a business card, with eight lines on one side, in black ink legible under a magnifying glass. Just below the line about Jesus having a wife, the papyrus includes a second provocative clause that purportedly says, “she will be able to be my disciple.”

The finding is being made public in Rome on Tuesday at an international meeting of Coptic scholars by the historian Karen L. King, who has published several books about new Gospel discoveries and is the first woman to hold the nation’s oldest endowed chair, the Hollis professor of divinity.

Even with many questions unsettled, the discovery could reignite the debate over whether Jesus was married, whether Mary Magdalene was his wife and whether he had a female disciple. These debates date to the early centuries of Christianity, scholars say. But they are relevant today, when global Christianity is roiling over the place of women in ministry and the boundaries of marriage.

The discussion is particularly animated in the Roman Catholic Church, where despite calls for change, the Vatican has reiterated the teaching that the priesthood cannot be opened to women and married men because of the model set by Jesus.

“This fragment suggests that some early Christians had a tradition that Jesus was married,” Dr. King said. “There was, we already know, a controversy in the second century over whether Jesus was married, caught up with a debate about whether Christians should marry and have sex.”

What convinced them it was probably genuine was the fading of the ink on the papyrus fibers, and traces of ink adhered to the bent fibers at the torn edges. The back side is so faint that only five words are visible, one only partly: “my moth[er],” “three,” “forth which.”   “It would be impossible to forge,” said Dr. Luijendijk, who contributed to Dr. King’s paper.

“It’s hard to construct a scenario that is at all plausible in which somebody fakes something like this. The world is not really crawling with crooked papyrologists,” Dr. Bagnall said.   The piece is torn into a rough rectangle, so that the document is missing its adjoining text on the left, right, top and bottom — most likely the work of a dealer who divided up a larger piece to maximize his profit, Dr. Bagnall said.

Ariel Shisha-Halevy, an eminent Coptic linguist at Hebrew University in Jerusalem, was consulted, and responded in an e-mail in September, “I believe — on the basis of language and grammar — the text is authentic.”

Posted by Michael-in-Norfolk at Tuesday, September 18, 2012

Can't wait to hear the gnashing of teeth and see the flying spittle!