Why Are Muslims - and Fundamentalists in General - So Easily Offended? 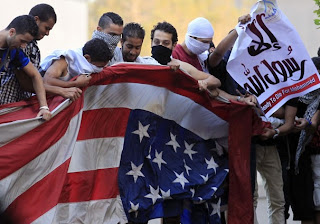 An op-ed in the Washington Post looks at the question of why the Muslims in the Arab world are so easily offended by what they perceive to be insults to  Islam in general or Mohammad in particular.   It's a question that, in my view, also applies to Christian fundamentalists who seem to look for what they describe as insults to their religious beliefs.  In both instances, there is a huge fear of modernity and an unspoken fear that what if critics are correct in their condemnation of fundamentalist faiths?  Too many of the adherents fear the same thing: having to think for themselves and having to formulate their own moral decisions in a world vastly different that that in which both Christianity and Islam first arose.

And as the article in the Post also indicates, there is a huge sense of inferiority because the glories of the past for both religions have been lost.  Once the Catholic Church and Islam both fostered and protected knowledge of the past and respected learning.  Now, one can argue that the inflexibility and refusal to accept modern knowledge are at the root of the very causes for the decline of the intellectual levels of both Christianity and Islam.  Sooner or later modernity and new knowledge make old beliefs become untenable except for those who consciously decide to remain ignorant.  Any religion that refuses to change and adapt and which requires the equivalent to a lobotomy to maintain unchallenged belief is doomed to eventually die.  Just as we are seeing the slow death of Christianity in the western world because of conservative Christianity's refusal to change.  Conservatives in both Christianity and Islam are unwittingly the worse enemies of both faiths.  Here are some column excerpts:

Modernity requires the willingness to be offended. And as anti-American violence across the Middle East and beyond shows, that willingness is something the Arab world, the heartland of Islam, still lacks.

Time and again in recent years, as the outside world has battered the walls of Muslim lands and as Muslims have left their places of birth in search of greater opportunities in the Western world, modernity — with its sometimes distasteful but ultimately benign criticism of Islam — has sparked fatal protests. To understand why violence keeps erupting and to seek to prevent it, we must discern what fuels this sense of grievance.

There is an Arab pain and a volatility in the face of judgment by outsiders that stem from a deep and enduring sense of humiliation. A vast chasm separates the poor standing of Arabs in the world today from their history of greatness. In this context, their injured pride is easy to understand.

In the narrative of history transmitted to schoolchildren throughout the Arab world and reinforced by the media, religious scholars and laymen alike, Arabs were favored by divine providence. They had come out of the Arabian Peninsula in the 7th century, carrying Islam from Morocco to faraway Indonesia. In the process, they overran the Byzantine and Persian empires, then crossed the Strait of Gibraltar to Iberia, and there they fashioned a brilliant civilization that stood as a rebuke to the intolerance of the European states to the north. Cordoba and Granada were adorned and exalted in the Arab imagination. Andalusia brought together all that the Arabs favored — poetry, glamorous courts, philosophers who debated the great issues of the day.

If Islam’s rise was spectacular, its fall was swift and unsparing. This is the world that the great historian Bernard Lewis explored in his 2002 book “What Went Wrong?” The blessing of God, seen at work in the ascent of the Muslims, now appeared to desert them.

The coming of the West to their world brought superior military, administrative and intellectual achievement into their midst — and the outsiders were unsparing in their judgments.

Even as Arabs insist that their defects were inflicted on them by outsiders, they know their weaknesses. Younger Arabs today can be brittle and proud about their culture, yet deeply ashamed of what they see around them. They know that more than 300 million Arabs have fallen to economic stagnation and cultural decline.   .   .   .   .   In the privacy of their own language, in daily chatter on the street, on blogs and in the media, and in works of art and fiction, they probe endlessly what befell them.  But woe to the outsider who ventures onto that explosive terrain. The assumption is that Westerners bear Arabs malice, that Western judgments are always slanted and cruel.

We know the celebrated cases when modernity has agitated the pious. A little more than two decades ago, it was a writer of Muslim and Indian birth, Salman Rushdie, whose irreverent work of fiction, “The Satanic Verses,” offended believers with its portrayal of Islam.  .   .   .   .   The confrontation laid bare the unease of Islam in the modern world.

The storm that erupted this past week at the gates of American diplomatic outposts across the Muslim world is a piece of this history. As usual, it was easily ignited.

It is never hard to assemble a crowd of young protesters in the teeming cities of the Muslim world. American embassies and consulates are magnets for the disgruntled. It is inside those fortresses, the gullible believe, that rulers are made and unmade. Yet these same diplomatic outposts dispense coveted visas and a way out to the possibilities of the Western world.

The ambivalence toward modernity that torments Muslims is unlikely to abate. The temptations of the West have alienated a younger generation from its elders. Men and women insist that they revere the faith as they seek to break out of its restrictions.

Cultural freedom is never absolute, of course, and the Western tradition itself, from the Athenians to the present, struggles mightily with the line between freedom and order. In the Muslim world, that struggle is more fierce and lasting, and it will show itself in far more than burnt flags and overrun embassies.

One huge irony is that the Christofascist elements in America - especially in today's Republican Party - hate and condemn Muslims when in fact both the condemned and those that condemn them suffer from the same affliction: a refusal to adapt to a changing world and to admit any possibility that maybe, just maybe, their religion doesn't have all the answers.  For both fundamentalist Christians and Muslims this truth threatens their flimsy house of cards world view and fabricated definition of who they are.  It terrifies both groups and outrage and violence are the natural fruits of closed minds and limited world views.  As they fight against modernity and knowledge, Pope Benedict XVI and the ayatollahs have more in common than either would like to admit.  I've often said that gays are so hated by both groups of fundamentalists because our existence suggests that perhaps the Bible and the Koran are in error.
Posted by Michael-in-Norfolk at Sunday, September 16, 2012