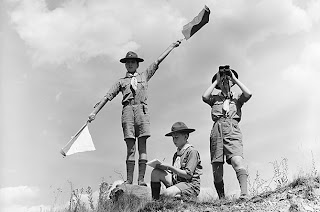 Like the Roman Catholic Church, the Boy Scouts of America continues to discriminate against gays as a matter of policy.  However, the Boys Scouts share another trait with the Catholic Church: knowingly and deliberately protecting sexual predators and allowing them to cover their tracks.  A new report put together by the Los Angeles Times and republished by the Virginian Pilot - one such predatory, Arthur Humphries, who molested 20 boys resided in nearby Chesapeake - documents the moral bankruptcy of the Boy Scouts and how, like the Catholic Church hierarchy, the welfare of youths was subordinated to protecting molesters.  So much for any true morality in scouting.  Here are some story highlights:

Over two decades, the Boy Scouts of America failed to report hundreds of alleged child molesters to police - including a Scout leader in Chesapeake - and often hid the allegations from parents and the public.

A Los Angeles Times review of 1,600 confidential files dating from 1970 to 1991 has found that Boy Scouts officials frequently urged admitted offenders to quietly resign - and helped many cover their tracks.

The details are contained in the organization's confidential "perversion files," a blacklist of alleged molesters, that the Scouts have used internally since 1919. Scouts' lawyers around the country have been fighting in court to keep the files from public view.

As The Times reported in August, the blacklist often didn't work: Men expelled for alleged abuses slipped back into the program, only to be accused of molesting again. Now, a more extensive review has shown the Scouts sometimes abetted molesters by keeping allegations under wraps.

In about 400 of those cases - 80 percent - there is no record of Scouting officials reporting the allegations to police. In more than 100 of the cases, officials actively sought to conceal the alleged abuse or allowed the suspects to hide it, The Times found.

With 50 years in Scouting, Arthur W. Humphries (at left) appeared to be a model leader, winning two presidential citations and the Scouts' top award for distinguished service - the Silver Beaver - for his work with disabled boys in Chesapeake.  Unknown to most in the city, he also was a serial child molester.

A few months after Humphries' arrest in 1984, local Boy Scouts official Jack Terwilliger told The Virginian-Pilot that no one at the local Scout council had had suspicions about Humphries.  But that was not true. Records in Humphries' file show that six years earlier, Terwilliger had ordered officials to interview a Scout who gave a detailed account of Humphries' repeated acts of oral sex on him.

Officials not only failed to report Humphries' alleged crime to police, records show, they also gave him a strong job reference two years later, when he applied for a post at a national Scouting event.   .   .   .   .   Humphries continued to work with Scouts and molested at least five more boys before police, acting on a tip, stopped him in 1984. He was convicted of abusing 20 Boy Scouts, some as young as 8, and was sentenced to 151 years in prison.

In 1982, a Michigan Boy Scout camp director who learned of allegations of repeated abuse by a staff member told police he didn't promptly report them because his bosses wanted to protect the reputation of the Scouts and the accused staff member.

"He stated that he had been advised by his supervisors and legal counsel that he should neutralize the situation and keep it quiet," according to a police report in the file.

In many cases, Scouting officials said they were keeping allegations quiet as a way of sparing young victims embarrassment.  The result was that some alleged molesters went on to abuse other children, according to the Scouts' documents and court records.


Like the Catholic Church, the Boy Scouts discriminate against normal. well adjusted gays yet  coddle and protect known sexual predators.  Talk about having your priorities backwards.  My opinion of scouting - I was a scout myself many years ago - goes down with every passing day.
Posted by Michael-in-Norfolk at Monday, September 17, 2012