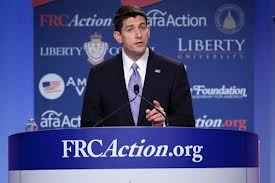 Right Wing Watch has a plethora of videos and links recounting the hate and batshitery that marked this week's misnamed "Values Voter Summit" ("VVS") in Washington, D.C., sponsored by several certified hate groups.  A visit to Right Wing Watch gives an in dept look at the hate, bigotry and efforts to undermine the civil rights of other citizens which now the hallmark of the Christofascist controlled Republican Party.  It goes without saying that (1) LGBT individuals were treated with scorn and worse at this coven of hate merchants, and (2) Republican candidates like Paul Ryan were falling all over themselves in their effort to completely prostitute themselves to the Christianist attendees.  For a quicker review of the nastiness that predominated at VVS, Politicususa has a good overview.  Here are highlights:

Over the weekend in Washington D.C., various Republicans took turns addressing the Values Voters Summit (VVS), and true to its name, participants met to promote their values that have earned some of the Summit’s sponsor’s designation as hate groups. The meeting was hosted by the Family Research Council’s FRCAction, and sponsored by the American Family Association that are both anti-gay groups, and according to the Southern Poverty Law Center, certified hate groups. Other anti-gay organizations participating in the VVS were Jerry Falwell’s Liberty University, American Values, The Heritage Foundation, and Liberty Counsel that links anti-gay, anti-women, anti-Islam, and anti-Black hate groups to the values embraced by the VVS. The summit is a hate group, and although its featured speaker, Paul Ryan, claimed he took an oath to defend and support the Constitution and not the government, he endorsed the group’s patently unconstitutional agenda of denying all Americans their rights guaranteed in the United States Constitution.

The 14th amendment says “no State shall make or enforce any law which shall abridge the privileges or immunities of citizens of the United States; nor shall any State deprive any person of life, liberty, or property, nor deny to any person within its jurisdiction the equal protection of the laws.” The Values Voters Summit is predicated on supporting legislation with the intent purpose of depriving women, gays, and non-Christians liberty and equal protection under the law by virtue of their interpretation of the Christian bible. When speakers were not denigrating President Obama for not following their biblical edicts, cowboy diplomacy, and trickle-down economic theory, they demonized African Americans, women, LGBT people, and thanks to an American’s hate-inspired anti-Islam video, Muslims.

Romney endorsing and thanking a hate organization was the culmination of a steady stream of speakers who took turns assailing President Obama for myriad sleights of their imagination. Michele Bachmann attacked the President for being “the most dangerous president we have ever had on American foreign policy,” and claimed he “ceded to the demands of an Islamist organization and the Muslim Brotherhood,” and mandated that all U.S. security agents, including the military and FBI, be “brainwashed in political correctness toward Islam.” Another speaker, Gary Bauer, who accused the President of “forcing gay marriage on this country,” made an overtly racist assertion that “President Obama’s voters are mostly welfare recipients and dead voters in cities with large Black populations.” Eric Cantor said “only traditional marriage allows for the pursuit of happiness,” and another Republican told the audience that “Planned Parenthood is a racist organization.” The only value evident at the VVS besides hate was mendacity based on their incessant lies about President Obama.

The Values Voters Summit was not an expression of American values or a representation of the Constitution’s guarantee of freedom and equal rights. It was the Republican vision of a theocracy where only white heterosexual couples adhering to fanatical Christian values and anti-government sentiments were real Americans, and any variation was an abomination before god.

As a set of consistent values and measures, The Values Voters Summit has more in common with neo-Nazi fascism than it does American values and they are undoubtedly the Republican Party of Willard Romney and Paul Ryan.

If one wants a good reason to walk away from Christianity, spending the weekend witnessing the hate and venom of the "godly Christian" crowd would likely suffice.  These people are a clear and present danger to democracy and constitutional government.  I agree with the articles author that the VVS attendees  have more in common with Nazi doctrine that they do with the Gospel of Jesus Christ.

Posted by Michael-in-Norfolk at Sunday, September 16, 2012