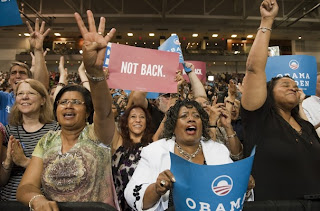 The latest polls show both Mitt Romney and Tim Kaine leading their GOP opponents.  These numbers in large part are due to the gender gap with women significantly preferring the Democrat candidate over the 11th century loving Republicans.  And both the GOP party platform and the Republican Party of Virginia's anti-woman jihad back in the spring during the last session of the Virginia General Assembly only help to push women away from the knuckle dragging Neanderthals and puppets of Christofascists at The Family Foundation who comprise today's Virginia GOP.  A piece in the Washington Post looks at the role women will play in delivering Virginia this November.  Here are highlights:

In a presidential campaign where women’s issues have taken a more prominent role than many expected, the crucial swing state of Virginia is becoming the Grand Canyon of gender gaps.

A new Washington Post survey indicates that President Obama holds a 19-percentage-point lead (58 to 39 percent) among female likely voters in the commonwealth yet is running six points behind Republican nominee Mitt Romney among men who are likely to vote (50 to 44 percent). That support from women is the reason the president now holds an eight-point advantage overall in Virginia.

This year, however, ginning up female support has become an imperative for Obama in his reelection bid. Across the electoral map, the Obama campaign is banking on women to offset an expected loss to Romney among men.

In few places, if any, does that effort appear to be succeeding as well as it is in the Old Dominion. That is in part a reaction to heavy-handed Republican moves on reproductive issues, but it also reflects an apparent affinity that women feel with Obama on economic concerns.

[T]he gender gap in Virginia is more than twice as big as the national one, according to recent polling. The current numbers mark an even starker contrast from the presidential election four years ago, when men and women in Virginia voted almost identically in favor of Obama.

Support from women is also fueling the rise of Democratic Senate candidate Timothy M. Kaine, who has moved into an eight-point lead over his fellow former governor, George Allen (R). The difference with men, however, is not as pronounced as it is in the presidential race: Kaine has a 15-point advantage over Allen with women, and he is tied with men.

So why do men and women in Virginia see this year’s election so differently?  Democrats and their allies say that it is partly the result of what has happened in Virginia since 2009, including an effort by Republicans in February to require women seeking an abortion to undergo an ultrasound with a vaginal probe.

Virginia legislators ultimately backed off somewhat, passing a version of the bill that mandated a less intrusive procedure. But that was not until after the controversy had produced a mother lode of material for late-night comedians — and, some believe, cost McDonnell his shot at being Romney’s running mate.

“What’s different this year is that women see all this and say, ‘Oh, my God, they are serious, and they might have the power to do this,’ ” said Dawn Laguens, executive vice president of public policy and advocacy of the Planned Parenthood Federation of America.

In The Post’s Virginia poll, Obama leads Romney by 22 points on women’s issues — his single biggest advantage in the 10 issues tested. More than nine in 10 men and women alike say the economy will be “extremely” or “very important” in their votes, but nearly six in 10 women say social issues, such as abortion and same-sex marriage, will also be a factor. Fewer than four in 10 men are focused on these issues.


It will certainly be ironic if it turns out the The Family Foundation and its GOP puppets through their religious based batshitery end up delivering Virginia to Obama and Kaine.  Now that would be some Divine justice.
Posted by Michael-in-Norfolk at Thursday, September 20, 2012