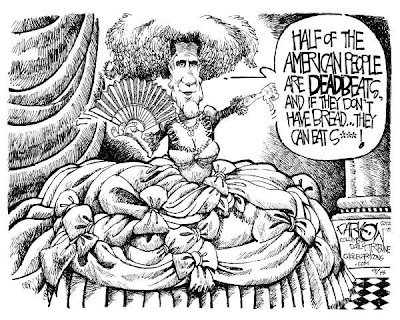 It was only a matter of time before The Onion weighed in on Mitt Romney's amazingly stupid and callous remarks to his millionaire donors captured on the secret video released earlier this week.  Here's a sampling:

SALT LAKE CITY—Seeking to limit the fallout from a videotaped speech in which he asserts 47 percent of Americans “pay no taxes” and do not take “personal responsibility and care for their lives,” Mitt Romney hastily called a press conference today to apologize personally to the “150 million starving, filthy beggars [he] might have offended.”

Saying that he deeply regretted his choice of words at a private $50,000-a-plate fundraising function in May—during which he argued “[his] job is not to worry” about the lower-earning half of the nation’s populace—Romney personally appealed to the country’s “dirt-caked garbage pickers and toothless street urchins” for forgiveness.

“First and foremost, I would like to offer a heartfelt apology to all the whores, junkies, bums, and grime-covered derelicts out there who make up nearly half our nation,” a visibly contrite and solemn Romney said outside a campaign stop at a local high school. “Let me assure you that I in no way meant to offend any of the putrid-smelling, barefoot masses out there. My campaign is not about dividing this nation, but about bringing all sides together—the rich, elegant members of the upper class, as well as the 47 percent who are covered in flies and eat directly from back-alley dumpsters.”

Posted by Michael-in-Norfolk at Wednesday, September 19, 2012

Email ThisBlogThis!Share to TwitterShare to FacebookShare to Pinterest
Labels: 2012 elections, millionaires, Mitt Romney, out of touch, The Onion, wealthy