The Danger of Democrat Complacency 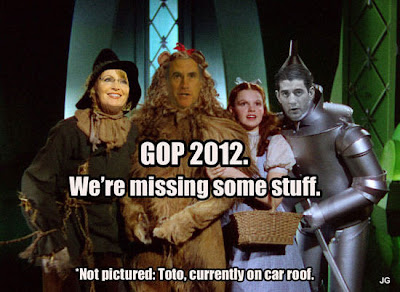 With the campaign of Mitt Romney seemingly in self-destruction mode,  I and others have a real fear that too many Obama supporters - including the Obama staffer living with the boyfriend and me through election day - are fearful that some may feel that they can be less vigilant and may even stay home on election day.  As a piece in Politico under scores, this is a a dangerous self-deception.  The anti-Obama super PAC's still have huge sums that will be expended and in many states the race remains very close.  Thus the need to mobilize every anti-Romney and anti-GOP voter to get to the polls.  There is a second reason to push for the largest turn out possible: Romney and the GOP need to be defeated by the largest margin possible in order to send a message that their vision for America and their contemptuous view on half the population or more is not acceptable and will be DOA in the future as well.  Only then will the GOP perhaps begin the journey back to rationality.  Here are some story highlights:

Mitt Romney’s campaign might appear to be collapsing like a cheap card table, but one top Democrat close to President Barack Obama had a curt warning for allies who were declaring the election all but over on Tuesday.  It ain’t over, he said, until Karl Rove sings.

That litmus test of when George W. Bush’s former impresario gives up on the race reflects the unprecedented strength of the powerful money machine supporting the GOP. It also shows why even a wounded Republican standard-bearer could limp to victory in November.

Caution is not the message emanating from the Washington echo chamber or from giddy Democrats — and depressed Republicans — who are drafting Romney’s political obituary with nearly 50 news cycles before Election Day.

But Romney, however humbled, has nearly 50 more chances to change the narrative. Despite his stunning missteps, his failure to articulate an attractive rationale for his candidacy, a growing GOP pessimism and tales of corrosive internal dissent, he remains within easy striking distance of Obama in most polls and is showing no signs of imminent collapse.  His support isn’t likely to dip much below 45 percent to 47 percent largely because nine in 10 Republicans are backing him.

“President Obama may make major strategic decisions in response to two tough days in the fishbowl — but that’s not how Crossroads rolls,” said Jonathan Collegio, spokesman for the Rove-linked groups American Crossroads and Crossroads GPS.

“Democrats should just remember Florida 2000 before they get cocky,” veteran Democratic strategist Karen Finney said. “It’s the stuff you don’t see that goes under the radar — the robocalls … fliers and mailings. … That’s the kind of stuff you can’t detect. Karl Rove knows how to win,” she said.

[S]upport among white men is one key aspect of the tape that’s been overlooked: A lot of voters, especially white, working-class men, basically agree with Romney’s portrait of a country overrun by tax deadbeats and spongers.

As of Tuesday morning, Obama’s post-convention bump was starting to fade, and RealClearPolitics’s summary of polls had him up, on average, by only 3 points nationally. Its average of state-by-state polls showed growing but still modest Obama leads in the critical battlegrounds — up 3 in Nevada, 4 in Ohio, ahead by barely a point each in Florida and Virginia, although a Washington Post/NBC poll released Tuesday showed Obama with a widening lead of 8 points in Virginia.

The bottom line is that nothing can be taken for granted and all of us who cringe at Mitt Romney's view of and vision for America need to keep working to convince our friends and family members that they MUST go out and voted against Romney and the GOP on election day.  LGBT Americans in particular should be terrified of the prospect of Romney taking the White House and undoing all of Obama's pro-LGBT executive orders.
Read more: http://www.politico.com/news/stories/0912/81369_Page2.html#ixzz26uaWtxKk


Posted by Michael-in-Norfolk at Wednesday, September 19, 2012