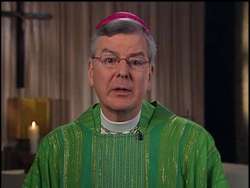 I would have posted on this story (which I revel in personally) sooner, but the last few days for work have been insane with evening meetings and today an early business breakfast the result of which has been no time to write blog posts.  As many will recall, now former Archbishop John C. Nienstedt of St. Paul and Minneapolis has been among the most virulently anti-gay prelates of the Roman Catholic Church in America.  His lap dog, auxiliary bishop, Lee A. Piché, has all too willingly gone along for the homophobic ride.  Meanwhile, of course, Nienstedt has been up to his ears in cover ups for sexual predator priests and even had an abuse complaint filed against him personally.  Now, both Nienstedt and Piché have tendered their resignations.  One can only hope that they will be named personally for criminal prosecutions.  One can likewise hope that the many other bishops and cardinals who aided and abetted predatory priest will also soon be driven or removed from their positions.  The New York Times looks at this much needed development.   Here are excerpts:

Two bishops in the Roman Catholic Archdiocese of St. Paul and Minneapolis resigned their posts Monday, the second time this spring that American church leaders have stepped aside after complaints over their handling of sexual abuse claims involving priests.


In Minnesota, Archbishop John C. Nienstedt and an auxiliary bishop, Lee A. Piché, announced their departures less than two weeks after prosecutors in St. Paul accused the archdiocese of willfully ignoring warning signs of a pedophile priest. Their resignations followed the April exit of Bishop Robert W. Finn from the Diocese of Kansas City-St. Joseph in Missouri, who had been convicted of a misdemeanor for failing to report a priest who took pornographic pictures of girls.

Though sexual misconduct by individual priests has long drawn headlines in Minnesota and around the world, the latest resignations come amid a push to punish the church leaders who did not intervene.

Under Pope Francis, the Vatican has stepped up efforts to hold bishops accountable for covering up or failing to take action in sexual abuse cases, including the announcement last week of a tribunal to weigh such cases.

The Rev. Federico Lombardi, a Vatican spokesman, did not say Monday whether the two Minnesota bishops had been or would be judged by the tribunal. “It is a valid question,” Father Lombardi said. “I have no information for now.”

John J. Choi, the prosecutor in Ramsey County, Minn., said the resignations would not affect his office’s criminal and civil cases against the archdiocese, which accused church leaders of failing to intervene against a priest despite repeated complaints of misconduct. That priest, Curtis Wehmeyer, has since been defrocked and imprisoned on sexual abuse charges involving boys in his parish.
“While today’s resignation will be viewed as a positive development by many in our community, the pending criminal action and civil petition and the ongoing investigation will continue,” Mr. Choi said in a statement. “As we have said, the goals of our actions are to hold the Archdiocese accountable, seek justice for the victims and our community, and to take appropriate steps to ensure that what we have alleged and intend to prove about the past conduct of church officials will never be repeated.”


In accepting the resignations, the pope appointed the Rev. Bernard A. Hebda, a coadjutor archbishop of Newark, as apostolic administrator to oversee the Minnesota archdiocese. The Vatican also announced on Monday that it would open a trial in July of its former ambassador to the Dominican Republic, Jozef Wesolowski, on charges of sexually abusing boys while he served in the Caribbean and of possessing child pornography.


Jeff Anderson, a lawyer in Minnesota who has represented victims of sexual abuse by clergy, said more top officials needed to be held accountable for their actions, and that criminal charges would be appropriate for some of them.

Mr. Anderson attributed Monday’s developments to the criminal charges against the archdiocese and unflattering disclosures made in recent civil cases. Many of those lawsuits were made possible by legislation that allowed victims to sue the church over abuse that happened years ago, and for which the statute of limitations had expired.

“This is about a culture and system that has been intractable,” Mr. Anderson said. “It needs to continue on a headlong course toward full accountability and full disclosure.”

The Boston Glob still has been doing bona fide reporting on the issue of sacerdotal statutory rape.

Even for an institution that measures its history in centuries, not decades, the Vatican’s move toward sanctions against bishops who cover up for pedophile priests seems glacial.

So when news arrived last week that Pope Francis has approved the creation of a church tribunal to do just that, embracing the recommendations of a papal commission led by Boston’s archbishop, Cardinal Sean P. O’Malley, you could imagine a Greek chorus of abuse victims responding: “It’s about time.’’


Had the tribunal been in place back in 2002, when the clergy sexual abuse crisis exploded in Boston and quickly spread around the globe, there is little doubt who would have been the first bishop hauled before the panel.

That would be Bernard Francis Law, one of O’Malley’s predecessors who resigned in disgrace in late 2002 and continues to live in gilded retirement in Rome where he is regarded — if not quite a pariah — as an embarrassment, an archbishop whose silence, even after he knew kids were being assaulted, was beyond indefensible.