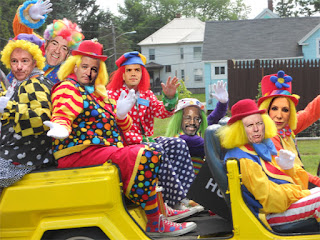 As regular readers know, I view Pope Francis with a great deal of skepticism.  I've even noted that he seems bi-polar as he swings form rational, progressive statements to again embracing the Church idiocy in the form of 13th century understanding of the "natural law."  But I do enjoy seeing Francis lob bombs at the Republican Party's agenda of vulture capitalism and environmental destruction.  And as a piece in Salon notes, Francis' new encyclical on climate changes will certainly expose the con-artist hypocrisy of a number of Republicans, including a number of the occupants of the GOP 2016 clown car.  Here are article highlights:

Over the past few weeks, we’ve heard the initial cannon volleys from the parapets of the GOP hurled in the direction of Pope Francis. But as of yesterday, when the Pope delivered a major encyclical on the climate crisis, there was a thermonuclear freakout, from not just Fox News and AM talk radio, but nearly every Republican with internet access. Already, Greg Gutfeld from Fox News Channel’s The Five referred to the Pope as the “most dangerous man in the world.”

Pope Francis’s encyclical was specifically intended as a call to action on man-made global warming. And this particular call to action contains, among other things, the following groundbreaking line:


We are not God. The earth was here before us and it has been given to us. This allows us to respond to the charge that Judaeo-Christian thinking, on the basis of the Genesis account which grants man “dominion” over the earth (cf. Gen 1:28), has encouraged the unbridled exploitation of nature by painting him as domineering and destructive by nature. This is not a correct interpretation of the Bible as understood by the Church.

That low rumbling noise you just heard was the sound of a million paleoconservative collapsing on their fainting couches. The Pope, here, is completely undermining the religious cornerstone for the entire GOP position on the climate, as well as pollution, animals and nature in general. Simply put: Sorry, no, the Bible doesn’t give us the power to ruin the planet for humans or other forms of life.

At this point, there are three candidates officially bungee-corded into the overstuffed clown car that is the GOP primary: Rick Santorum, Marco Rubio and Jeb Bush. Catholics Chris Christie and Bobby Jindal haven’t declared yet. All five Republicans deny that human activity has precipitated the crisis. In fact, both Santorum and Jindal believe the whole thing is a hoax.

[I]f there’s one crucial aspect of this which ought to be hammered by anyone within shouting distance of the Catholics in the race, it’s the issue of faith and consistency. Simply put: If it’s okay for Bush, Santorum and Rubio to simply waive the Church’s teachings on the climate crisis, why is it impossible for them to do the same when it comes to their religion-based positions on abortion, contraception and same-sex marriage?

It’s really no wonder the Republicans hate this Pope in spite of their self-branding as religious zealots. Bottom line: Francis makes them look ghoulish. I’m not religious now, but I was raised Catholic. I don’t like every word that comes out of the Pope’s mouth, but I much prefer Pope Francis’ God, and don’t have any interest in knowing Rick Santorum’s God.

The ultimate incongruity is this: The Pope has consistently, though not always, illustrated exactly how people of faith can serve the common good, while the GOP is more interested in exploiting religion to oppress, restrict and demonize. This really what’s freaking them out. And after Thursday, the rage will be thick and it’ll set new records for ugliness.