The GOP's Out of Touch Presidential Contenders 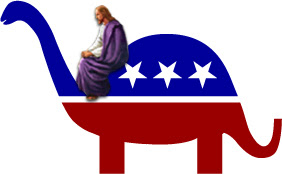 Despite the Republican Party's claims that it is a "big tent" welcoming to all, the reality is that unless one is a far right religious conservative of near fanatic proportions, a white supremacist with a mentality well suited for KKK membership, or a greed driven plutocrat, there really is little room in the GOP tent for you.  This lack of inclusiveness and obtuseness toward modernity and the nation's changing demographics is demonstrated by the substance of what the GOP's would be presidential candidates pontificate about on the campaign trail.  Any window dressing of inclusiveness is just that, window dressing.  A column in the New York Times reviews how the GOP remains out of touch with those who do not fit within the narrow requirements for inclusion in the party.  Here are highlights:

For all the party’s self-congratulation about a field of official and unofficial presidential candidates who depart from the fusty norm, the truth is that they don’t depart nearly enough.


Yes, they’re a racially diverse group, including Bobby Jindal, who is Indian-American; Marco Rubio and Ted Cruz, who are Cuban-American; and Ben Carson, who is African-American.

Yes, Rubio and Bush speak Spanish, as Bush did in Miami on Monday during his formal campaign announcement, which had the multiethnic flourish of a Coca-Cola Super Bowl commercial.

Yes, Cruz and Rubio are both under 45. Rubio in fact looks young enough to be Bernie Sanders’s grandson. He advertises an affinity for hip-hop and rap. He name-checks Pitbull and Nicki Minaj.

[B]eneath their playlists and campaign choreography, [the GOP candidates] aren’t so impressively in touch with the times either.

Although more than 70 percent of American adults under 35 support same-sex marriage, not one candidate in the sprawling Republican field has explicitly taken that position, and most have expressed impassioned opposition.

Although an increasing fraction of American adults, including about a third of those under 35, now pronounce themselves religiously unaffiliated, there’s no sense of that drift in the emphatic religious testimonials of most of the Republican candidates, including Bush, Rubio and Scott Walker, who introduces himself as a preacher’s son.


Almost all of them are at odds with young Americans’ belief in climate change and stated desire for immigration reform.

Where’s the Republican presidential contender for them?

Where’s the Republican candidate who can enter into an important, necessary debate about the size, role and efficacy of government without being weighed down by a set of statements and positions on social issues that seem tailored to placate the religious right and to survive the primaries, not to capture voters in the center?

[T]here’s a void, and Hillary Clinton and her advisers have certainly noticed it. That awareness informed her own speech on Saturday, on Roosevelt Island, where she made many references to young Americans, to L.G.B.T. Americans, to minorities, to working women. Her remarks constituted a road map of the precise terrain that Democrats want to keep — or put — beyond Republicans’ reach.