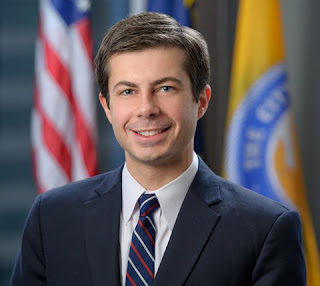 Pete Buttigieg (pictured above), who is the mayor of South Bend Indiana - not a particularly gay friendly state -  is the youngest mayor of a city with more than 100,000 residents in America.  Yesterday, Buttigieg, age 33, came out as gay in a powerful essay published by the city's local newspaper on Tuesday.  In the op-ed, Buttigrieg made the case as to why coming out is so important, both for one's own well being, but also for the larger LGBT community.   It is easy to hold prejudices against those that one does not know - or thinks one doesn't know.  When suddenly the class despised and condemned by religious extremists and bigots is discovered to include friends, neighbors and family members, it is much more difficult to continue to hang on to the hate and bigotry peddled primarily by the "godly folk."  If EVERY gay were to come out of the closet completely and cease living a furtive, closeted or semi-closeted life, we would have secured full equality long before now.  Here are excerpts from Buttigrieg's column:

Any day now, the Supreme Court will issue a decision on same-sex marriage that will directly affect millions of Americans. It comes at a time of growing public acceptance and support for equal rights. But no matter what the Court does, issues of equality are hardly settled across the country. Today it remains legal in most parts of Indiana (though not South Bend) to fire someone simply for being gay, and bullying still contributes to tragically high suicide rates among LGBT teens.


Experiences with friends or family members coming out have helped millions of Americans to see past stereotypes and better understand what being gay is — and is not. Being gay isn’t something you choose, but you do face choices about whether and how to discuss it. For most of our history, most Americans had no idea how many people they knew and cared about were gay.

My high school in South Bend had nearly a thousand students. Statistically, that means that several dozen were gay or lesbian. Yet when I graduated in 2000, I had yet to encounter a single openly LGBT student there. That’s far less likely to be the case now, as more students come to feel that their families and community will support and care for them no matter what.


I was well into adulthood before I was prepared to acknowledge the simple fact that I am gay. It took years of struggle and growth for me to recognize that it’s just a fact of life, like having brown hair, and part of who I am.

Putting something this personal on the pages of a newspaper does not come easy. We Midwesterners are instinctively private to begin with, and I’m not used to viewing this as anyone else’s business.

But it’s clear to me that at a moment like this, being more open about it could do some good. For a local student struggling with her sexuality, it might be helpful for an openly gay mayor to send the message that her community will always have a place for her. And for a conservative resident from a different generation, whose unease with social change is partly rooted in the impression that he doesn’t know anyone gay, perhaps a familiar face can be a reminder that we’re all in this together as a community.

Whenever I’ve come out to friends and family, they’ve made clear that they view this as just a part of who I am. Their response makes it possible to feel judged not by sexual orientation but by the things that we ought to care about most, like the content of our character and the value of our contributions.

Being gay has had no bearing on my job performance in business, in the military, or in my current role as mayor.

We’re moving closer to a world in which acceptance is the norm. This kind of social change, considered old news in some parts of the country, is still often divisive around here. But it doesn’t have to be. We’re all finding our way forward, and things will go better if we can manage to do it together. In the wake of the disastrous “Religious Freedom Restoration Act” episode here in Indiana earlier this year, we have an opportunity to demonstrate how a traditional, religious state like ours can move forward.

Like most people, I would like to get married one day and eventually raise a family. I hope that when my children are old enough to understand politics, they will be puzzled that someone like me revealing he is gay was ever considered to be newsworthy. By then, all the relevant laws and court decisions will be seen as steps along the path to equality. But the true compass that will have guided us there will be the basic regard and concern that we have for one another as fellow human beings — based not on categories of politics, orientation, background, status or creed, but on our shared knowledge that the greatest thing any of us has to offer is love.

Towleroad notes these other things about Buttigrieg:

According to his Facebook page, Buttigieg is a reserve officer in the Navy, and a graduate of both Harvard and Oxford universities.

IndyStar.com reports that Buttigieg, a Democrat, is in his first term and faces re-election this year.

Response to Buttigieg's essay on social media has been overwhelmingly positive .

Yes, coming out is terrifying, especially for us older gays, and can be fraught with upheaval.  My divorce was a nightmare and I was wiped out financially for a time.  But I cannot stress how wonderful it is to just be who I am.  No more hiding, no more self-loathing, no more secrets and feeling like an actor on a stage.  If people cannot accept you for who you are, then you are better off not having them in your life be they family members or those you thought were friends.  And remember, if they cannot accept you, it ultimately is because of their selfishness and their refusal to rethink matters and/or let go of ridiculous myths and fairy tales.  Kudos to Buttigrieg.
Posted by Michael-in-Norfolk at Wednesday, June 17, 2015

For being "not particularly gay friendly", Indiana sure seems to be doing fairly well. It was still among the first half of the 50 states to get legalized gay marriage, and, unlike most other Midwestern states, it never successfully passed a constitutional amendment banning SSM (only a statute). It's generally very friendly to gay adoption--largely due to the initiatives passed by the more moderate preceding Governor, Republican Mitch Daniels. Nearly all the hoopla that makes Indiana seem anti-gay has been in the last three months through Governor Pence and RFRA--but it would be hard to deny that the Pence came out of that debacle far worse than gays in the state. I'm not saying Indiana is a Netherlands of North America, but I can think of many, many places in the US that are much more hostile.