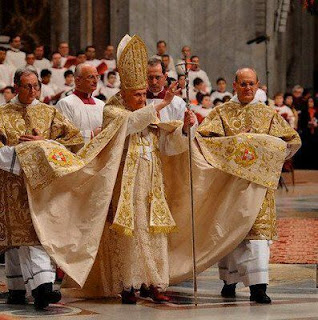 I am beginning to wonder whether Pope Francis is bi-polar.  One minute he is saying something progressive and accepting of science and modern knowledge - e.g., his encyclical on climate change - yet the net minute he says something worthy of the worse ignorance embracing Christofascist.  The later is exemplified by his statement claiming that gay couples with children are not capable of loving children like heterosexual parents.  Of course, Francis knows nothing of marriage or parenting himself being a celibate man.  And I suspect that he has never sat down with a same sex couple and their children, nor has he read any of the legitimate studies finding that the children of same sex couples do just as well as those with heterosexual parents - or that most child abuse is done by heterosexual parents.  The Daily Grind looks at this outburst of batshitery.  Here are excerpts:

Pope Francis once again stressed the importance of children being raised by heterosexual parents on Sunday (June 14), likening a long-lasting marriage to a good wine, in which a husband and wife make the most of their gender differences.

Francis addressed a crowd of about 25,000 followers from the Diocese of Rome, saying the differences between men and women are fundamental and “an integral part of being human.”

“They’re not scared of the differences!” the pope said. “What great richness this diversity is, a diversity which becomes complementary, but also reciprocal. It binds them, one to the other.”


He stressed that heterosexual marriages ensure a couples’ happiness and are essential for good parenting.

The pontiff’s address came a day after Rome celebrated gay pride with a parade which included the city’s mayor, Ignazio Marino, just outside the Vatican walls.

What children need are parents. Parents who will love them, nurture them and protect them. What they don’t need is to be told that the anatomy of the parents raising them will somehow make them into better people. In fact, research shows that children raised by same sex couples do as well as those raised by heterosexual couples.

Francis, not gays is the one who is afraid.  Francis also conveniently ignores the reality that at least here in America, 50% of straight marriages end in divorce and that the children of such marriages witness a reality that is far different than Francis' fairytale vision of marriage.   Why anyone listens to the blather of celibate old men when it comes to issues of marriage and child rearing is baffling.  These are the LAST people to give realistic advice or guidance.
Posted by Michael-in-Norfolk at Thursday, June 18, 2015