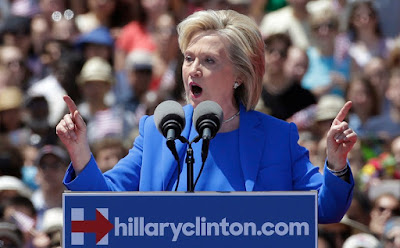 Hillary Clinton made her first "big speech" yesterday on Roosevelt Island in the East River of New York City.  Reportedly, the crowd turnout wasn't what was hoped for, yet her speech which some described as "flat" covered many issues and, as The Atlantic notes, laid out details that no Republican presidential candidate, declared or not, has yet to offer.  The event underscored what are Hillary's biggest challenges: (i) she does not have her husband's charisma, and (ii) she has yet to ignite any real excitement.   Personally, I find ALL of the GOP would be presidential nominees to be frightening, and not merely because they all seem to be seeing who can be the most anti-gay, but because they seem only too willing to betray our troops by launching more fool's errands in the Middle East and because their economic policy continue the GOP war on the middle and working classes.  Will others support her and turn out to the polls in November 2016 merely because they find the GOP candidate too frightening?  Here are excerpts from The Atlantic piece:


In her 45-minute address on New York's Roosevelt Island, a wooded sliver in the East River between Manhattan and Queens, Clinton laid out many proposals that Democrats care about. She did so in a speech that was almost aggressively pedestrian, devoid of soaring rhetoric or big ideas. “America can't succeed unless you succeed,” she said. “That's why I am running for president of the United States.” Clinton’s entire candidacy, it seemed, was built around a non sequitur.

The occasion itself was a strange one. Saturday's speech was, according to Clinton's campaign, a “launch,” yet Clinton announced her candidacy two months ago. Was she hoping to start over? Certainly not, her staff insisted—everything, they say, is going just fine, terrifically even. The chairman of Clinton's campaign, John Podesta, resorted to a baseball metaphor to explain the double beginning: “We've had spring training,” he said. “Now it's opening day.”

In keeping with the campaign so far, Saturday's speech was quite substantive and quite liberal. It was also quite flat. Clinton read it slowly off the teleprompter, articulating every word, sometimes with odd emphasis, in a near-monotone. Clinton spoke in Four Freedoms Park, a locale chosen for its symbolic freight.

She segued into what she called her “four fights”: to make the economy work for the middle class; to strengthen America's families with pro-worker policies; to “maintain our leadership for peace,  security and prosperity”; and to reform government and revitalize democracy. Under these vague headings she crammed expanding renewable energy, fighting climate change, funding infrastructure, universal preschool and childcare, making college affordable, paid sick days, paid family leave, equal pay for women, services for the addicted and mentally ill, a path to citizenship for undocumented immigrants, a ban on discrimination against gay and transgender people, and automatic voter registration.

[N]o one could accuse Clinton of not having an agenda; none of the Republican candidates has offered such a barrage of proposals. Recent polls have shown that most voters do not find Clinton trustworthy. She is apparently betting that policy and substance can be a substitute for character and personality.

Clinton’s advisers worry about the lack of passion the candidate elicits, but Saturday's speech was so non-rousing as to make one wonder whether that wasn't intentional—was it an attempt to bring Clinton down to earth, to make her ordinary? To deflate the aura of fame that clings to her and turn her into just another candidate, one who is solid and sensible and not too flashy, with lots of concrete plans?

Clinton tried this tack before, in 2008, when she tried in vain to convince Democratic voters that Barack Obama was all style and no substance. But this time, she is hoping she won't have that kind of competition.