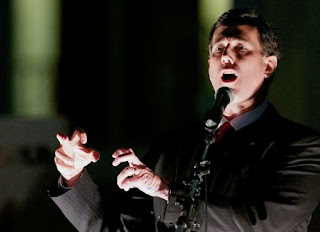 Despite the fact that all of the evidence available so far indicates that the massacre at the historic black church in Charleston was motivated by racial hatred and white supremacist views, on the campaign trail today the ever delusional Rick Santorum sought to label the hate crime as an "attack on religious liberty."  Sadly, Santorum was not alone in trying to divert the subject from the real motivation for the crime and pander to the ugliest elements of the GOP party base.  Joining in the disinformation campaign was all to predictably GOP presidential candidate and, of course, Fox News, a/k/a Faux News on this blog.   Talking Points Memo reports on Santorum's disingenuous lies.  Here are highlights:

Presidential candidate and former Sen. Rick Santorum (R-PA) on Thursday called the attack by a white gunman on a historic black church in Charleston, S.C. part of a broader assault on "religious liberty" in America.

"It’s obviously a crime of hate. Again, we don’t know the rationale, but what other rationale could there be?" Santorum said on the New York radio station AM 970.

"You’re sort of lost that somebody could walk into a Bible study in a church and indiscriminately kill people,” he added.

Santorum called for a broader pushback against the "assaults" on religious liberty.

"You talk about the importance of prayer in this time and we’re now seeing assaults on our religious liberty we’ve never seen before.

The nastiest, tawdry whore has more integrity and moral decency than Santorum.  As for Fox News' effort to avoid responsibility for inciting people like Dylann Roof, Huffington Post looks at the campaign of lies.  Here are highlights:

Analysts on Fox News floated the theory on Thursday that the shooting at a historically black church in Charleston, South Carolina, on Wednesday night was motivated by religious animosity toward Christians, rather than by racism.

Host Steve Doocy suggested on "Fox & Friends" that religion was the likely motivation for the terrorist attack.

"Extraordinarily, they called it a hate crime," Doocy said in an interview with a pastor Thursday morning. "And some look at it as, well, it's because it was a white guy, apparently, and a black church. But you made a great point just a moment ago about the hostility toward Christians, and it was in a church, so maybe that's what it was about."

Doocy's co-host, Brian Kilmeade, also tried to cast doubt on the idea that the gunman, whom authorities believe to be 21-year-old Dylann Storm Roof, was motivated by race, asking a guest, "Is it a church that has white congregants as well as black?"

But the gymnastics that Fox commentators engaged in to find some other motive is disconcerting. Why were they so afraid the attack might prove to be racially motivated?