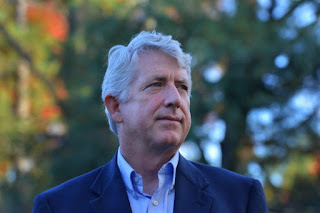 As the Virginia GOP has become increasingly out of step with a majority of Virginians and changing demographics have made winning state wide elections nearly impossible, rather than change its agenda and enter the 21st century, the Virginia GOP has opted instead to work to disenfranchise voters hostile to the party's extremist and racist policies.   One example id the voter ID law rammed through the GOP dominated Virginia General Assembly where Republicans hold sway thanks to gerrymandered districts.  Now, Attorney General Mark Herring has brought in outside counsel to avoid a conflict of interest as Democrats challenge the Virginia GOP's anti-democratic handiwork.  Here are highlights from the Daily Press:

The move allows Herring, a Democrat who voted against voter ID when he was in the state Senate, to avoid arguing directly in the law's defense. His office said Mark F. "Thor" Hearne II, a partner in the D.C. offices of Arent Fox, will handle the case, which Democratic groups filed against the state earlier this month.

Democrats challenging the law argue that Virginia's photo ID law is unconstitutional, but their case is much broader than that. It challenges long waits times on election day and says the Republican-controlled legislature deliberately targeted minority voters, young people and other likely Democratic voters when it rewrote voting rules.

The case was brought by Mark Elias of Perkins Coie, an attorney and firm with deep Democratic ties. The suit is part of a multi-state effort to challenge voting rules ahead of the 2016 elections. The firm is also challenging Virginia's election districts in a pair of ongoing suits.

Herring said in a statement Friday that outside counsel for the voter ID case was needed to avoid "any concern that my previous advocacy would result in anything less than a vigorous defense."

"Nothing is more fundamental than the right to vote and my position on these issues is clear," Herring said in the statement. "I have consistently opposed these measures and worked hard in the legislature to combat them."

The speaker's office declined to comment Friday on Hearne's selection. Howell and other Republican legislative leaders may hire their own attorney in this case, as they did in the cases challenging Virginia's election districts.

The Virginia GOP needs to grasp the simple concept that if your platform cannot win a majority of voters, it's the platform that needs to change rather than changing rules so as to keep people from voting.
Posted by Michael-in-Norfolk at Saturday, June 20, 2015