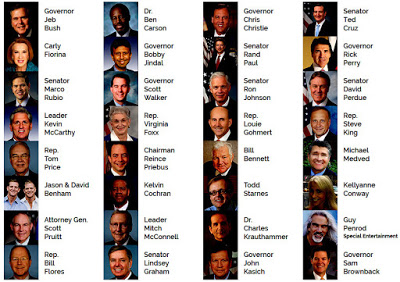 The contest among the Republican 2016 presidential clown car to see who can most prostitute themselves to the most extreme Christofascist element of the GOP base.  Hence the near stampede to attend, and better yet speak at the seriously misnamed - at least in terms of freedom - 2015 Faith and Freedom Conference sponsored by Ralph Reed's theocratic organization.  Of course, it will not be just the clown car occupants at the rostrum.  The event will be a cavalcade of insanity and batshitery with some of the most deranged members of the GOP speaking, not to mention numerous hate group leaders.  Joe Jervis describes the confab well:

Disgraced Christian activist Ralph Reed's Faith & Freedom Coalition will hold its sixth annual "Road To Majority" conference this week in Washington DC. Confirmed speakers include eight of the eleven declared GOP presidential candidates, as well as notorious crackpot figures Todd Starnes, the Benham brothers, and Michael Medved. Not yet listed as attending are Huckabee, Santorum, and Pataki, however still undeclared candidates Jindal, Walker, and Christie will be there.

Also attending: Reince Priebus, Phyllis Schlafly, Gary Bauer, and Penny Nance, who is the head of Concernstipated Women, this year's title sponsor. Other 2015 sponsors include NOM, the World Congress Of Families, Tea Party Patriots, Townhall, Liberty University, and (rather curiously) the Humane Society. The event kicks off with a VIP dinner on Wednesday night, followed by a "full lobbying day on Capitol Hill."

Some of the "breakout sessions" include:

Tolerance Vs. True Love: When it Takes Courage to Protect Your Conscience & Compassion to Reach the Lost

The War On Christianity: How Religious Freedom Is Under Attack

Who is Concerned Women for America & How Can You Be Involved?