A Pro-Same-Sex Marriage Ruling Will Not Resolve Parents’ Rights 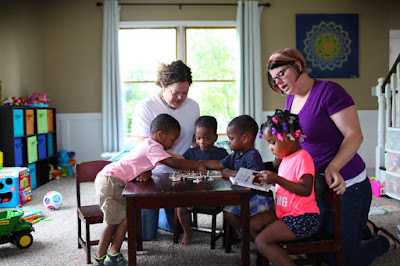 At a recent panel discussion I attended, one topic that came up is what will still need to be done to win fully LGBT equality even if the U.S. Supreme Court strikes down state same sex marriage bans as is widely expected.  For starters, it 29 states, - including Virginia which always brings up the rear guard it seems - LGBT employees will still be subject to being fired at will based on their sexual orientation or gender identity/expression.  Then there is the whole realm of parental adoption.  Some states ban gay adoption, others restrict adoption to single gays or lesbians.  Here in Virginia, the governor and attorney general have stated that married same sex couples can adopt just like heterosexual couples, yet private adoption agencies so far are still allowed to discriminate against gays seeking to adopt based on "religious belief" - a parting gift to bigots by former Governor (and now convicted felon) Bob McDonnell and former Attorney General Ken "Kookinelli" Cuccinelli.  The New York Times looks at the minefields that still will exist for gays seeking to adopt in many states.  Here are highlights:

When Jessica and Melissa Tincher take the four-hour road trip from their home in Lexington, Ohio, to visit relatives in Indiana, it is a two-vehicle affair: They need car seats for each of their four children — a 4-year-old, a 3-year-old and 2-year-old twins — along with Pack ’n Plays, high chairs, diapers and enough toys to keep everyone entertained. And then there are the two dogs, who together weigh 165 pounds.

But as their caravan crosses state lines, the family’s relationship changes. In Ohio, their marriage is not fully recognized, which is why only one parent — Jessica — was permitted to adopt the four biological siblings who came to them through the foster care system. When they drive into Indiana, where they were both raised and married last June, the couple’s union is valid, but Melissa still does not have any parental rights.

They live in Ohio because Jessica’s job as an air traffic controller is there. So Melissa, who stays home to care for the children, must carry around a permission slip of sorts when she takes them to the doctor or other appointments. “I am with them all day every day,” Melissa said. “I take care of their day-to-day needs, and I have no rights to them legally. It’s hurtful.”

If same-sex marriage is legalized nationwide as part of the monumental case before the Supreme Court  . . . .  married couples living in states that do not acknowledge their unions will gain significant financial and legal benefits.   But as sweeping as the changes will be, one aspect of marriage may not always be automatically guaranteed: parental rights.

Family law varies in different states, which is why the advice to same-sex couples will remain the same: Nonbiological parents wishing to fully cement legal relationships with their children may need to take another step like adopting or securing another court-ordered judgment. If the court rules in their favor, gay couples would for the first time be able to widely adopt children regardless of which state they live in.

The right to adopt would provide a profound sense of relief to the Tinchers, along with same-sex households across the country, because it would largely end the inequality for many couples whose children have legal ties to only one parent.

Now, only individuals or couples whose marriages are legally recognized can generally adopt children in most states. That means same-sex couples can adopt in at least 35 states that issue marriage licenses to same-sex couples, along with the District of Columbia . . .

National marriage status could also provide another way to create legal ties to children, although it may be more tenuous in some states. Traditionally, children born to a married woman are generally presumed to be the legal children of her husband. Many states also have laws that say the husband of a woman who is artificially inseminated with donor sperm is the child’s legal father, if he consents to the procedure. Those laws also apply to two married women in many states, but it is unclear whether all states will adopt that position if same-sex marriage is legalized nationwide.


Because of the way interstate recognition works on different issues, adoption is the only way to ensure that a parent-child relationship is recognized across state lines, said Joanna L. Grossman, a professor of family law at Hofstra University.

Some nonbiological parents may not even realize that they have legal relationships with only some of their children, or with those born after the same-sex couple was married.
Legalizing same-sex marriage will not eliminate the potential for discrimination over parental rights in every corner of the country, particularly in places already working on legislation that would undermine a pro-marriage ruling. Michigan just passed a law that would allow state-funded child welfare agencies to deny services to people — including same-sex couples who want to provide foster care or adopt — based on religious grounds. Virginia and North Dakota already have similar religious exemption laws, according to the Movement Advancement Project, and Alabama and Texas have proposed them.

Read the entire piece.  And remember that all of these anti-LGBT laws and regulations have one ultimate purpose: (i) to force Christofascist religious beliefs on all citizens, (ii) to punish gays for not complying with Christofascist religious dogma, and (iii) to allow the Christofascists to feel superior and self-satisfied.  As for the children harmed by such bigotry their response, as Rhett Butler said to Scarlett, is simply "frankly my dear, I don't give a damn."
Posted by Michael-in-Norfolk at Tuesday, June 16, 2015