Despite Vatican’s New Abuse Tribunal, Some Clergy Get a Free Pass 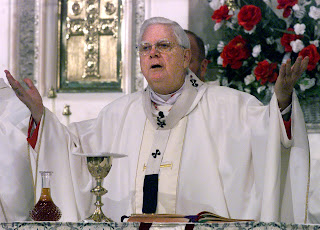 As noted yesterday, two bishops who were protectors of predatory priests have resigned in the diocese of St. Paul and Minneapolis.  While some have taken the Vatican's acceptance of the resignations as a sign that the Vatican is much belatedly going to hold accountable bishops and cardinals who aided and abetted sexual predatory priest - and who often threatened and intimidated victims - one figure indicates that such is not truly the case.  Who is this individual? Cardinal Bernard Law, the former Archbishop of Boston (pictured above), who continues to live the life of a prince at the Vatican.  Until Law faces dismissal and defrocking, Pope Francis' efforts will remain window dressing and mere PR control measures.  The Boston Globe looks at Law and his avoidance of any true punishment.  Here are highlights:

Even for an institution that measures its history in centuries, not decades, the Vatican’s move toward sanctions against bishops who cover up for pedophile priests seems glacial.

So when news arrived last week that Pope Francis has approved the creation of a church tribunal to do just that, embracing the recommendations of a papal commission led by Boston’s archbishop, Cardinal Sean P. O’Malley, you could imagine a Greek chorus of abuse victims responding: “It’s about time.’’

Had the tribunal been in place back in 2002, when the clergy sexual abuse crisis exploded in Boston and quickly spread around the globe, there is little doubt who would have been the first bishop hauled before the panel.

That would be Bernard Francis Law, one of O’Malley’s predecessors who resigned in disgrace in late 2002 and continues to live in gilded retirement in Rome where he is regarded — if not quite a pariah — as an embarrassment, an archbishop whose silence, even after he knew kids were being assaulted, was beyond indefensible.

Blanchette told Law about his abuse by the parish priest. He warned Law that many other men, similarly abused, would need counseling. And then, stunningly, this: Law “laid his hands on my head for two to three minutes and then said, ‘I bind you by the power of the confessional never to speak about this to anyone else.’ ”

Tom Blanchette, 67, now lives in Hilton Head, S.C., where once a week he drives 45 miles to one of that state’s poorest counties, delivering food supplied by the federal government.

I wonder if Cardinal Law is doing something like that in Rome. I doubt it.

“The Bible tells me to love my enemy and to pray for those who persecute me,’’ Blanchette said. “Forgiveness is the act of the will. You can’t fake it.’’

But even he wonders about men whose first impulse was not to protect children, but an institution that routinely kept ugly and criminal secrets.

Those who have near orgasms over some of Pope Francis' statements would be wise to remember Law and the way he has escaped true punishment before they allow  themselves to get too carried away.  Better yet, they need to remember that there are a lot more like Law sit within the Church hierarchy.