The Vatican Issues a Warning on Climate Change 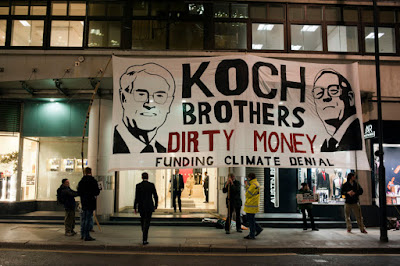 While I hold the Vatican in less than high esteem, in one of his "Dr. Jekyll" phases Pope Francis has issued an encyclical on climate change that has immediately garnered attacks from Rick Santorum and Jebbie Bush, both of whom like to wear their Catholicism on their sleeves, especially for campaign purposes, and reactions from the GOP that make the party faithful seem either severely constipated and/or in need of extra strength Midol.  As much as the Koch brothers and their allies in the carbon fuels industry spin out misinformation - a polite term for lies - most Americans do seem to be catching that the climate is indeed changing.  A column in the Washington Post looks at Poper Francis' encyclical and things that can be done to begin to make a difference in mankind's contribution to climate change.  Here are highlights:

The document is eloquent and intelligent, especially in its handling of science. “Most global warming in recent decades is due to the great concentration of greenhouse gases (carbon dioxide, methane, nitrogen oxides and others) released mainly as a result of human activity,” it says. “Concentrated in the atmosphere, these gases do not allow the warmth of the sun’s rays reflected by the earth to be dispersed in space.” That is as lucid a two-sentence description of the mechanism of global warming as I have read.

The encyclical is gloomy. But in fact, remarkable changes are taking place that could put the planet on a much more sustainable path. You get a sense of them if you read another important report that was issued this week, to much less fanfare than the pope’s missive — the International Energy Agency’s special report on energy and climate change.

The report points out that last year the global economy grew at 3 percent but that energy-related carbon dioxide emissions stayed flat, the first time this has happened in 40 years. Renewables accounted for nearly half of all new power generation last year, and the energy intensity of the global economy dropped by twice as much as it has on average annually over the past decade. With concerted action, we could actually push global emissions downward in the next few years.

The cost of solar cells has plummeted, leading to their widespread use. Cars, buildings and machines are becoming much more energy efficient. And over the horizon, one can see progress in batteries, nuclear power and biofuels, which could collectively produce a new energy ecosystem.

We need a revolution in public policy as well. Fred Krupp, head of the Environmental Defense Fund, points out that most of the improvements that have been made in technology and efficiency would not have happened without rules and laws. And a series of smart policies — which are not very costly or disruptive — could dramatically accelerate the shift to a cleaner economy. First, stop doing harm.

Even Bjorn Lomborg, a skeptic about many efforts to tackle global warming, argues for a reduction in the massive, market-distorting subsidies for fossil fuels. The IEA estimates that last year these subsidies globally amounted to $510 billion, about four times those provided to renewable energy.

[S]olar power could become far more widespread if governments were not as beholden to utility companies and their phalanx of lobbyists. “There are lots of nonmarket barriers to renewables, placed at the behest of the established players,” he said.

Natural gas is better than coal, but its production, transport and use release significant amounts of methane, which has much worse effects on the climate than carbon dioxide. The good news is that serious studies have found that these emissions could be reduced relatively cheaply with new regulations.

The smartest new policy would be the simplest, . . . a carbon tax — effectively putting a price on greenhouse gas emissions to encourage companies to adopt cleaner technologies. This seems impossible to imagine — yet this month, several major oil companies in Europe [BG Group, BP, Eni , Royal Dutch Shell, Statoil and France's Total] came out in favor of a price on carbon, whether through a tax or an emissions trading system like those used in California and Europe.

Technology and policy innovations are happening, just not on the scale that they need to be. That’s why the pope’s warnings are so useful and important . . . .