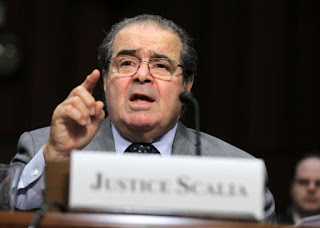 I did not intend to rightfully bash Antonin Scalia twice in one day, but a reader sent me a link to a column in the Miami Herald that takes Scalia to task for his bigotry and certainty over a death penalty case.  Indeed, Scalia used the supposed facts of the case to justify the death penalty.  The only problem is that in the meantime, DNA tests have proven that the alleged rapist and murderer was innocent.  It's yet another case of Scalia being dead wrong and more motivated by his own prejudices than facts and questionable prosecutions.  Here are column highlights:

To the Honorable Antonin G. Scalia, Associate Justice of the Supreme Court of the United States:

Twenty-one years ago, your then-colleague, the late Justice Harry Blackmun, wrote what became a famous dissent to a Supreme Court decision not to review a Texas death-penalty conviction.

You mocked him for this stance in an opinion concurring with the majority, invoking as justification for capital punishment the horrific 1983 case of an 11-year-old girl who was raped then killed by having her panties stuffed down her throat. “How enviable a quiet death by lethal injection,” you wrote, “compared with that!”

A few months later, the very case you had referenced came before the court. Henry Lee McCollum, a mentally disabled man who was on death row in North Carolina after having been convicted of that rape and murder, applied to the court for a review of his case. You were part of the majority that rejected the request without comment.

The demagoguery of your response to Justice Blackmun is pretty standard for proponents of state-sanctioned death. Rather than contend with the many logical and irrefutable arguments against capital punishment, they use a brute-force appeal to emotion.

Read more here: http://www.miamiherald.com/opinion/opn-columns-blogs/leonard-pitts-jr/article23877205.html#storylink=cpy
As you have doubtless heard, it now turns out McCollum was innocent of that crime. Last year, he and his also mentally disabled half-brother Leon Brown (who had been serving a life sentence) were exonerated by DNA evidence and set free.   A few days ago, McCollum was pardoned by North Carolina Gov. Pat McCrory.

The case against him was never what you’d call ironclad. No physical evidence tied him to the crime. The centerpiece of the prosecution’s case was a confession McCollum, then a 19-year-old said to have the mentality of a child 10 years younger, gave with no lawyer present after five hours of questioning.

“I had never been under this much pressure,” he told the News & Observer newspaper in a videotaped death row interview, “with a person hollering at me and threatening me...I just made up a false story so they could let me go home.”

You and your colleagues had a chance to intervene in that injustice and chose not to. Not incidentally, the real culprit avoided accountability all that time.

The argument against the death penalty will never have the visceral, immediate emotionalism of the argument in favor. It does not satisfy that instinctive human need to make somebody pay — now! — when something bad has been done. Rather, it turns on quieter concerns, issues of inherent racial, class, geographic and gender bias, issues of corner-cutting cops and ineffective counsel, and issues of irrevocability, the fact that, once imposed, death cannot be undone.

Those issues were easy for you to ignore in mocking Blackmun. They are always easy to ignore, right up until the moment they are not.

This is one of those moments, sir, and it raises a simple and obvious question to which one would hope you feel honor-bound to respond. In 1994, you used this case as a symbol of why we need the death penalty.  What do you think it symbolizes now?


Personally, I despise Scalia.  He is symptomatic of what is wrong with much of the judiciary.  Judges are supposed to be unbiased and, if unable to be unbiased and objective, they are to recuse themselves from the case.  Scalia is ALWAYS biased and has prejudged cases before hand based on his sole based on his own prejudices and preconceptions.  The prospects of a fair trial - or appeal in the case of the U.S. Supreme Court - is impossible with judges and justices like Scalia and his dimwitted cohort, Clarence Thomas. Both need to be removed from the Court.  Kudos to Leonard Pitts for this much needed column.