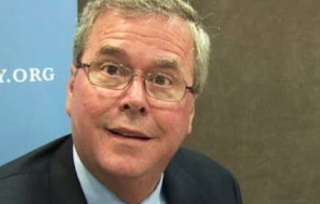 Jeb Bush may be trying hard to distance himself from his idiot brother, but he is quickly reminding us that he is just as out of touch with the reality of the lives of most Americans as was/is the Chimperator.  Moreover, he is out of touch with just how poorly America stacks up compared to other developed countries when it comes to child welfare and well being.  Bush brought all of this into focus while traveling in Europe where he condemned single mothers and said that children needed fathers and mothers to thrive where child welfare exceeds that of the America.  Perhaps Bush was pandering to the Christofascists, but the statement was as obtuse as when Mitt Romney praised Israel's health care system without grasping that it was a nationalized health system - something Romney was campaigning against.   Here are highlights from a New York Times column on the issue:

Last week, Jeb Bush was asked to answer for a passage from his book from two decades ago, “Profiles in Character,” in a chapter titled “The Restoration of Shame,” in which he blamed the “irresponsible conduct” of births to unmarried women on a flagging sense of community ridicule and shaming.

Bush responded, according to MSNBC: “My views have evolved over time, but my views about the importance of dads being involved in the lives of children hasn’t changed at all. In fact, since 1995 … this book was a book about cultural indicators [and] the country has moved in the wrong direction. We have a 40-plus percent out-of-wedlock birth rate.”

He continued: “It’s a huge challenge for single moms to raise children in the world that we’re in today and it hurts the prospects, it limits the possibilities of young people being able to live lives of purpose and meaning.”

But, as a 2014 Pew Research Center report points out:

“It’s important to keep in mind that just because a woman has a nonmarital birth, that does not necessarily mean that the mother is ‘going it alone.’ For instance, in the U.S., more than half of births that occur outside of marriage are to women who are cohabiting.”


And according to a 2013 Unicef report, “Child Well-Being in Rich Countries,” all those countries except Latvia (Bulgaria was not included) had higher ratings of overall children’s material well-being (a measure of things like child poverty rates; child deprivation of things like three meals, including some with protein and fresh fruit and vegetables; books; regular leisure activities; some new clothes and properly fitting shoes; and whether the family owned an automobile, traveled for vacations, had a computer and had a separate bedroom for the child).


In addition to material well-being, almost all of them outranked the United States in children’s health and safety, education, behaviors and risks, and housing and environment.

We spend quite a bit of energy blaming births to unmarried women for our woes, but that is only part of the picture. The other part is the way we as a society treat those women and the fathers of their children. Instead of endless efforts to sanctify marriage, the emphasis should be on finding ways to support children and encourage more parental engagement from both parents, regardless of marital status. This includes removing all barriers and penalties for people, especially the poor, to cohabitate.

Second, we have to examine how we have used the law as an instrument to push unwed fathers out of homes, particularly poor ones, rather than encourage them to stay.

Maybe a deficit of shame is not our problem, but rather a deficit of common sense in advancing policy and promoting co-parenting.

Sadly, once a child is born and is no longer a fetus, the concern of the Christofascists and the Republican Party disappears and programs that would aid child well being are slashed, insurance programs cut, and children, especially those of the poor are treated as disposable garbage.  The callousness and hypocrisy is truly breath  taking.  Jeb Bush is another clueless, out of touch plutocrat.  We do not need him holding any public office.