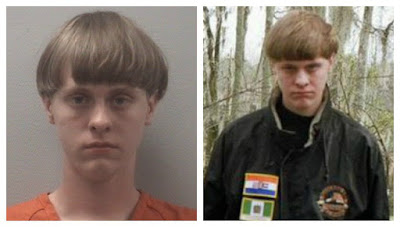 More and more details are emerging about the murder of nine people last night in the Emanuel African Methodist Episcopal Church in Charleston, South Carolina, and it is becoming more and more evident that hate and racism may have been a motivating factor.  The suspect, who was captured this morning in North Carolina, Dylann Storm Roof, 21, is reported to have made racist statements during the shooting spree and his Facebook profile picture shows him wearing a jacket decorated with the flags of two former white supremacist regimes, in apartheid-era South Africa and in Rhodesia, now Zimbabwe.  The New York Times and 13 News Now have details.  Of equal note is a piece in Esquire, which focuses on why the horrible event is not "unthinkable" or "unspeakable."  We have Republican politicians and "family values" organizations constantly sending racist dog whistle messages to their followers.  Is it any surprise that some take the message to heart and decided to act?  While Roof acted alone, in many ways he did not.  He had lots of encouragement from GOP politicians, Fox News and many far right pundits. First, these highlights from the Times piece:

The gunman wanted in the killing of nine people at a prayer meeting at a historic black church in this city’s downtown area was taken into custody Thursday morning in North Carolina.

The police here have said Mr. Roof, who is from the Columbia, S.C., area, is the white gunman who walked into a prayer meeting, sat down with black parishioners for nearly an hour, and then opened fire — a burst of violence that officials described as racially motivated.

Sylvia Johnson, a cousin of Mr. Pinckney, told NBC News that she had spoken with a survivor of the shooting who told her the gunman reloaded five times. The survivor, she said, told her that the gunman had entered the church and asked for the pastor. Then he sat next to Mr. Pinckney during the Bible study before opening fire.

“I have to do it,” the gunman was quoted as saying. “You rape our women and you’re taking over our country. And you have to go.”

The suspect's uncle, Carson Cowles, 56, tells Reuters that he recognized the young man in the surveillance photo as his nephew.

"The more I look at him, the more I'm convinced, that's him," Carson Cowles, 56, tells Reuters in a phone interview.

Cowles said Roof was given a gun by his father as a 21st birthday present in April.

As noted, the Esquire piece makes the case as to why thee should be little surprise that such an event could occur.  Here are excerpts:

We should speak of it as an attack on history, which it was. This was the church founded by Denmark Vesey, who planned a slave revolt in 1822. Vesey was convicted in a secret trial in which many of the witnesses testified after being tortured. After they hung him, a mob burned down the church he built. His sons rebuilt it. On Wednesday night, someone turned it into a slaughter pen.

It is not an isolated incident, not if you consider history as something alive that can live and breathe and bleed. We should speak of all these things. What happened in that church was a lot of things, but unspeakable is not one of them.

The country must resist the temptation present in anesthetic innocence. It must reject the false comfort of learned disbelief and the narcotic embrace of concocted surprise. There is a ferocious underground fire running through American history. It rages unseen until it flares again from the warm earth. It has raged from the death of Denmark Vesey in 1822 to the death of the Reverend and state senator Clementa Pinckney on Wednesday night.

This was not an unspeakable act. Sylvia Johnson, one of only three survivors of the massacre, is speaking about it.


"She said that he had reloaded five different times… and he just said 'I have to do it. You rape our women and you're taking over our country. And you have to go.'"

There is a timidity that the country can no longer afford.This was not an unthinkable act. A man may have had a rat's nest for a mind, but it was well thought out. It was a cool, considered crime, as well planned as any bank robbery or any computer fraud. If people do not want to speak of it, or think about it, it's because they do not want to follow the story where it inevitably leads. It's because they do not want to follow this crime all the way back to the mother of all American crimes, the one that Denmark Vesey gave his life to avenge. What happened on Wednesday night was a lot of things. A massacre was only one of them.