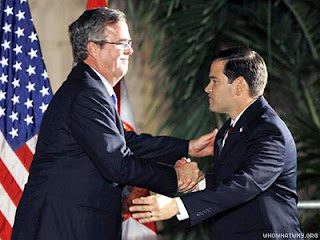 I often bemoan what has become of today's Republican Party and the way in which the party has allowed itself to be hijacked by the Christofiscists and their interbred first cousins in the Tea Party.   Despite the damage these ugly elements of the party base are doing to the GOP, no candidate dares take them on.  Hence, the endless self-prostitution that we are seeing among the 2016 slate of would be GOP presidential nominees. An op-ed in The Advocate looks further at why even outwardly rational candidates like Marco Rubio and Jeb Bush cannot revolt against the lunatics elements of the Christofascists and the Tea Party.  Here are highlights:


Jeb Bush and Marco Rubio epitomize the Republican Party’s inability to kick a dangerous, politically lethal habit. Despite polling that shows a growing majority of Americans are moving rapidly toward supporting equality and justice for LGBT people, these presidential candidates can’t help but pander to the one demographic exception to the progress: older white evangelical Republican voters.


ADVERTISING
No matter what their advisers warn, no matter what the research shows, it is a decades-old addiction that Bush and Rubio find impossible to quit. So even though poll after poll tells them sticking with the old wedge politics messaging could be the death of their party, they can’t help but think it’s safe to take one last hit.


But their addiction to an increasingly out-of-touch base is why they can’t sustain these poses and have scurried back to their anti-LGBT talking points the moment they are in front of a conservative audience.

When asked recently if he thought businesses should be able to discriminate against LGBT customers, Bush said, “Yes, absolutely, if it’s based on religious beliefs,” and in another interview he said that there is no constitutional right to same-sex marriage and that only traditional marriage can give “children born in poverty” a chance.  Not to be outdone, Rubio has said that marriage rights for gay couples pose “a real and present danger” to Christianity.


Their cynical strategy is to try offering these different messages to different audiences. The anti-LGBT rhetoric they serve up to their right-wing base is like the cigarette they smoke behind the trash bin hoping no one will notice. Fortunately, in the age of Twitter and the instantaneous blogosphere, they can no longer segment their audiences so neatly.

So why bother pretending to have shifted in their views only to publicly contradict themselves the moment they are in front of a conservative group? Because it’s not LGBT people or progressives or Democrats they are trying to fool. Their strategy is to sprinkle just enough hopeful quotes early in their campaign to mislead moderate Republicans and independent voters into believing they have evolved.

And if one of them becomes president, then what? Their records in Florida show us the best we could hope for is total neglect with occasional bursts of hostility.

In Tallahassee, neither Governor Bush nor House Speaker Rubio ever lifted a finger to help us at all. They never even agreed to meet with representatives of the LGBT community or our families, and year after year they completely ignored the hundreds of high school students who traveled as many as 12 hours to our safe schools lobby days to ask for protection from bullying.


Just like they were in Florida, neither of these two will be shy about feeding us to his party’s wolves whenever it suits him. If one of them becomes president, we can expect to never hear our names or our issues mentioned in the State of the Union address, unless it is to oppose the Employment Non-Discrimination Act or to support religious-based discrimination. Don’t bother checking your mailbox for that invitation to the Pride Month reception at the White House that Obama has hosted for the past six years.

This could have been the year the Republican Party broke from the ghosts of its anti-gay past. Instead the party leaders are like addicts ignoring the warnings, hoping voter suppression tactics and a big bankroll can score them one last election year fix.