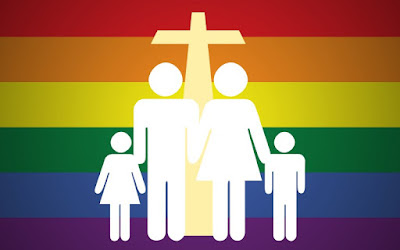 As other posts on this blog have noted, as the American Christofascists have been steadily losing the culture war over gay rights and marriage equality, they have been increasingly focusing their efforts on exporting the extreme religious beliefs and anti-gay animus overseas.   The Trojan horse that they are using for this endeavor is "protecting the natural family" which translates to opposing abortion, contraception, divorce (at least in theory) and, most importantly, gay equality and marriage.  Leading the export of ignorance and religious intolerance is the World Congress of Families (WCF) which defines the "natural family" as "centered around the voluntary union of a man and a woman in a lifelong covenant of marriage."  A piece in The Daily Beast looks at WCF's insideous throcratic agenda.  Here are excerpts:

The news looks bad for America’s conservative rear-guard. This month’s decision by the Supreme Court may soon make marriage equality the law of the land. Over three-quarters of Americans support anti-discrimination protection for gays and lesbians. One of our star athletes (and a Republican!) has transitioned her gender to overwhelming (though not universal) applause.
Does the Christian Right have a Plan B?

You bet they do. Their main weapon is an unfamiliar term: “natural family.” And they’re going to use it to beat back advances in women’s and LGBT equality worldwide, starting at the UN.

Since 1948, the United Nations has stated that the family is “the natural and fundamental group unit of society.” It makes policies and appropriates funds with that in mind.
But whose family? Does the term (and the policy and the money) only cover Mom-and-Pop nuclear families? Does it include single parents and kids? Gay families? Extended families? Families of choice?

These parameters are not just semantic, because they dictate policy. If “family” means a heterosexual couple with as many children as possible, then policies like family planning and LGBT equal rights should be opposed, if (a big if) they have a negative impact on families thus defined. If “family” is a broader term, then those same policies should be promoted.

These issues came to a head in 1994, designated the “Year of the Family” by both the United Nations and the Vatican. . . .In fact, progressives had sought to make 1994 the Year of the Families, plural. Conservatives successfully beat that back, but between pluralism and support for reproductive freedom, 1994 was a wakeup call.

“Natural family” was one response. As defined by its leading promoter, conservative activist Allan Carlson, the “natural family” is a small, conservative subset of actual families. It is “centered around the voluntary union of a man and a woman in a lifelong covenant of marriage,” and is for the purpose of “ensuring the full physical and emotional development of children.”  Although this definition is at variance with the Biblical institution of polygamy and concubinage, it nonetheless became the central value of the World Congress of Families (WCF), founded by Carlson in 1997 . . . .

One of WCF’s biggest successes is Russia. Beginning in the 1990s, Carlson and his Russian counterparts—conservative sociologists at Lomonosov Moscow State University—melded American “family values” conservatism with Russian concerns about a “demographic winter.” One result was the first WCF conference, in 1997, and its declaration that, in Parke’s words, “condemned policies that subvert ‘the legal and religious status of traditional marriage,’ as well as those that promote contraception and abortion, ‘state welfare systems,’ comprehensive sexual education, nonmarital cohabitation, ‘homosexual unions,’ and single parenting.”

[A]s it happens, there is no demographic winter—in Russia or anywhere else. What there is, both in Russia and the United States, is a demographic shift toward, bluntly speaking, more brown people and fewer white people. This is what the Russian Orthodox Church and Putin’s revanchist circle are fighting—and the WCF is happy to help.

Inside Russia, WCF helped pass the notorious Anti-Propaganda Law, banning gays from any public displays of existence, and wrote the ban on gay adoption.

[A]t the UN, Russia has blocked every effort to recognize multiple forms of family—most recently in June 2014 . . . “It is part of a broader agenda led by the U.S. Religious Right aimed at cementing a patriarchal and heteronormative family structure as the fundamental unit of society, and then using that as a tool to advance conservative, right-wing social policies through the UN and other international organizations.”

[At the 2015 WCF assembly in Salt Lakr City] the cast of characters will be the same: Russian and African far-rightists, together with WCF partners Focus on the Family, the Family Research Council, the American Family Association, Concerned Women for America, Americans for Truth About Homosexuality, Alliance Defending Freedom, and Americans United For Life.  Not surprisingly, the theme of the conference will be “religious liberty.”

There are plenty of reasons to take these wingnuts seriously. First, there’s a lot of money: oligarch/Putin money in Russia, conservative foundation money here. Second, the governments of Russia and many Global South countries are actively hostile to LGBT people, blaming them for every problem under the sun, from Ebola to Hollywood movies. Third, they may have the votes at the UN—as they did last year in Geneva.

It’s entirely possible that LGBTs and women throughout the world will suffer a backlash because of advances in rights for gay people and women in the US and Europe. That means those advocates in the West shouldn’t get too carried away with themselves. Opponents of equality are just getting started.

Religious conservatives remain a cancer on society and the world.  As throughout history, they continue to market hate, discord and theocracy at the expense of human rights and science and knowledge.
Posted by Michael-in-Norfolk at Sunday, June 14, 2015