Rick Perry: Charleston Massacre An 'Accident' Due To Drugs, Manipulated By Obama To Ban Guns 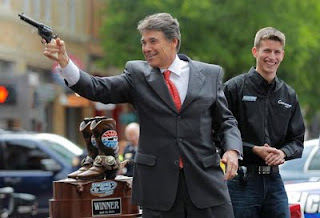 The sickness of the far right continues to be demonstrated by the unbelievable thinks being said by Republicans and others to avoid admitting that the mass murders in Charleston were a racially motivated act of domestic terrorism.   It seems that any and every excuse is more acceptable than admitting reality - and the responsibility of the GOP's dog whistle racism and refusal to pass laws that would lessen the insane number of guns in the hands of those who do not need to have them.  As Barack Obama noted, no other advanced nation has the gun carnage that is the norm in America.  Exemplifying the right's batshitery, Rick Perry (there REALLY must be something in Texas' water) described the murders as an "accident" fueled by drugs that Barack Obama has manipulated.  True to form, Perry later claimed he had "misspoken."  Meanwhile, Charles Cotton, a longtime board member of the National Rifle Association, blamed the deaths on one of the victims for opposing concealed carry laws.  Right Wing Watch looks at Perry's lunatic comments:


In an interview today with Steve Malzberg of Newsmax, former Texas Gov. Rick Perry described the mass shooting at an African American church in Charleston earlier this week as an “accident” that was possibly caused by the over-prescription of medication.   A Perry campaign aide now says that the former governor misspoke in the interview when he used the word “accident.”

Perry and Malzberg kicked off the discussion of the shooting by attacking President Obama for mentioning the failure to pass gun reform. Perry, a GOP presidential candidate, said that the president is trying to “take the guns out of the hands of everyone in this country.”

“This is the MO of this administration, any time there is an accident like this — the president is clear, he doesn’t like for Americans to have guns and so he uses every opportunity, this being another one, to basically go parrot that message,” Perry said.

Instead of talking about guns, Perry said, we should be talking about prescription drugs.  . . . He added that while the shooting was “a crime of hate,” he didn’t know if it should be called a terrorist attack.

As for Cotton's batshitery,  here are excerpts from Mother Jones:


Gun rights activists have been out in force since the massacre at Emanuel AME Church in Charleston, South Carolina, once again blaming the slaughter on so-called gun-free zones, and claiming that an armed citizen could have otherwise stopped the attack. It's an argument that the gun lobby has used for many years, but on Thursday afternoon it was marked by a brazen new low with comments from Charles Cotton, a longtime board member of the National Rifle Association. Cotton wrote on a Texas gun-rights forum that slain pastor and South Carolina state Sen. Clementa Pinckney was responsible for the murders of his congregants because of his opposition to looser concealed-carry laws.

"Eight of his church members, who might be alive if he had expressly allowed members to carry handguns in church, are dead," Cotton said. "Innocent people died because of his political position on the issue."

No one who has watched the horror unfold in Charleston doubts that the killer's motivation was infused with racial hatred. And to suggest that gun restrictions were the root cause of the bloodbath isn't just callous—it's also plain wrong.


As Mother Jones has previously reported, there has never been any evidence that mass shooters picked their targets based on gun regulations; to the contrary, data from scores of cases shows perpetrators had other specific motivations for where they attacked, including racial hatred. The idea that armed citizens stop crimes in the United States has also been wildly exaggerated by the gun lobby, as a new study based on federal data reaffirms.

Cotton's comments have since been deleted from TexasCHLforum.com, where he is listed as a site administrator. He did not reply to a request for further comment. In a statement on Friday to Politico, the NRA distanced itself from Cotton's rhetoric, saying individual board members "do not have the authority to speak for the NRA."