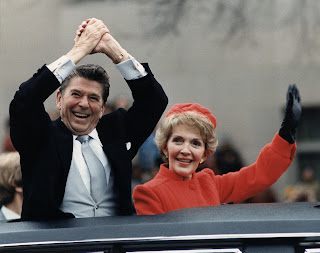 I came across this link to the Drudge Report which was just to good to pass up given the shrieks and tsunamis of spittle that must be overtaking the lunatic elements of the Republican Party base.  While the Christofascists and other elements of the GOP have made Ronald Reagan a virtual demigod, they regularly ignore the reality that he could not win the GOP presidential nomination today.  Despite his faults, which were numerous, Ronald Reagan (i) wasn't insane, (ii) wasn't consumed by anti-gay animus, and (iii) wasn't a white supremacists, all of which are requirements to be a member of today's GOP.  Underscoring this fact is the fact that when interviewed  for The History Channel’s upcoming series “First Ladies in Their Own Words,” Nancy Reagan stated that she wants Hillary Clinton to win in 2016.  Better yet, apparently Barbara and Laura Bush reportedly encouraged Hillary to run for the presidency.  I can only imagine the convulsions taking place in right wing households. Here are article highlights:

Last week, during a promotional press conference for The History Channel’s upcoming series “First Ladies in Their Own Words,” series’ host Ron Reagan shared clips of his interviews with all living former First Ladies of the United States. In a brief video clip with his mother Nancy Reagan, she offered her endorsement of Hillary Clinton as President saying, “The time for a woman to serve as our President has come – really, now is the time – and I think the idea of having a former First Lady as the leader of the free world is really quite a marvelous notion. I want Hillary to win. Even though I admire two of the current potential Republican nominees, I have no interest in seeing either of them lead this country.”

“First Ladies in Their Own Words” is the brainchild of Presidential historian Doris Kearns Goodwin and Ron Reagan, son of President Ronald Reagan. Broadcast in chronological order of their husbands’ terms in office, Goodwin and Reagan hope the series will show the importance of our First Ladies as a reflection of the culture of the nation during their years in the White House.

“First Ladies in Their Own Words” will focus on four particular issues and how each has evolved over the last 40 years. Those issues – Women’s Rights, Healthcare, Education and LGBT Rights – reveal a dynamic shift in what Americans think about what means to be “American.”

Asked about his mother’s endorsement of Hillary Clinton, Reagan thought it showed how little America actually knew about the woman behind the Republican icon. “She wants people to know that the First Ladies are tight. They get together once a year to support each other. In fact, Hillary had no interest in running until both Laura and Barbara Bush cornered her at their get-together in May 2013 and talked her into at least thinking about it! So, in a sense, if Mrs. Clinton does run and win, you can blame the Bush family.”

“First Ladies in Their Own Words” is not yet scheduled on The History Channel, but is expected to begin during the fall television season.

Jeb Bush will obviously have to be doing damage control on this last element.
Posted by Michael-in-Norfolk at Wednesday, June 17, 2015