The New York Times Warned Us 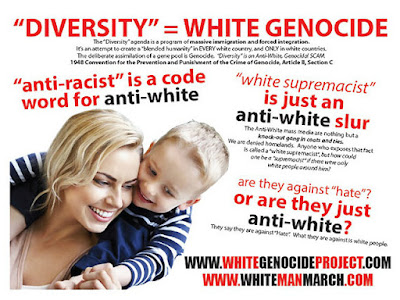 As noted by Crooks and Liars, just two days ago the New York Times ran an article on the dangers of right wing terrorism in America.  While Republicans and the GOP base obsess over the supposed threat of Muslim terror attacks, the real danger and far higher death toll comes from right wing terror attacks and mayhem.   The Southern Poverty Law Center tracks hate groups and potential right wing terror groups which are all too plentiful (there were 784 active hate groups in the United States in 2014, 19 of which are based in South Carolina - 27 are based in Virginia).    One has to wonder when the Republican Party will get its head out of its ass and wake up to the hate and bigotry that it is helping to foment.  Here are excerpts from the New York Times piece:

If you keep up with the news, you know that a small but steady stream of American Muslims, radicalized by overseas extremists, are engaging in violence here in the United States.


But headlines can mislead. The main terrorist threat in the United States is not from violent Muslim extremists, but from right-wing extremists. Just ask the police.

In a survey we conducted with the Police Executive Research Forum last year of 382 law enforcement agencies, 74 percent reported anti-government extremism as one of the top three terrorist threats in their jurisdiction; 39 percent listed extremism connected with Al Qaeda or like-minded terrorist organizations. And only 3 percent identified the threat from Muslim extremists as severe, compared with 7 percent for anti-government and other forms of extremism.

[W]e found in follow-up interviews over the past year with counterterrorism specialists at 19 law enforcement agencies. These officers, selected from urban and rural areas around the country, said that radicalization from the Middle East was a concern, but not as dangerous as radicalization among right-wing extremists.

An officer from a large metropolitan area said that “militias, neo-Nazis and sovereign citizens” are the biggest threat we face in regard to extremism.

Last year, for example, a man who identified with the sovereign citizen movement — which claims not to recognize the authority of federal or local government — attacked a courthouse in Forsyth County, Ga., firing an assault rifle at police officers and trying to cover his approach with tear gas and smoke grenades. The suspect was killed by the police, who returned fire. In Nevada, anti-government militants reportedly walked up to and shot two police officers at a restaurant, then placed a “Don’t tread on me” flag on their bodies. An anti-government extremist in Pennsylvania was arrested on suspicion of shooting two state troopers, killing one of them, before leading authorities on a 48-day manhunt. A right-wing militant in Texas declared a “revolution” and was arrested on suspicion of attempting to rob an armored car in order to buy weapons and explosives and attack law enforcement. These individuals on the fringes of right-wing politics increasingly worry law enforcement officials.

Since 2000,  . . . . 25 law enforcement officers have been killed by right-wing extremists, who share a “fear that government will confiscate firearms” and a “belief in the approaching collapse of government and the economy.”

[R]ight-wing extremists averaged 337 attacks per year in the decade after 9/11, causing a total of 254 fatalities, according to a study by Arie Perliger, a professor at the United States Military Academy’s Combating Terrorism Center. The toll has increased since the study was released in 2012.

Public debates on terrorism focus intensely on Muslims. But this focus does not square with the low number of plots in the United States by Muslims, and it does a disservice to a minority group that suffers from increasingly hostile public opinion. As state and local police agencies remind us, right-wing, anti-government extremism is the leading source of ideological violence in America.

The Raw Story looks at 10 of the worse right wing terror attacks and begins with this introduction:


When white males of the far right carry out violent attacks, neocons and Republicans typically describe them as lone-wolf extremists rather than people who are part of terrorist networks or well-organized terrorist movements. Yet many of the terrorist attacks in the United States have been carried out by people who had long histories of networking with other terrorists. In fact, most of the terrorist activity occurring in the United States in recent years has not come from Muslims, but from a combination of radical Christianists, white supremacists and far-right militia groups.