Pope Francis' Encyclical on the Environment Sides With Science. 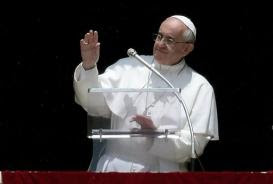 While the Roman Catholic Church ignores many aspects of science and scientific knowledge - e.g., modern knowledge on sexual orientation - a draft of Poe Francis' much-anticipated encyclical on the environment comes down hard on the side of science and sets the stage for Republican climate change deniers having to attack the Pope/Catholic Church.  In some ways the scheduled release of the encyclical could not be better in terms of roiling the political waters of the 2016 presidential contest.  A piece in The Daily Beast looks at the basics of the draft encyclical which should be causing headaches for Republicans like Marco Rubio who claim to be devout Catholics yet sell their souls to the ugliest elements of the ignorance embracing of the party base.  Here are article highlights:

It almost sounds like the beginning of a bad joke, but on Thursday a Catholic cardinal, an Orthodox theologian and an atheist scientist will walk into the Vatican synod hall and present Pope Francis’s hotly anticipated encyclical on the environment.  The hype around the document has been so fevered that it even spawned a silly spoof movie trailer in which the super pope fights an epic battle to save the planet.  And the Vatican City state secrecy that surrounded it only increased the drama.

But on Monday, a leaked version of the encyclical was published prematurely by the Italian weekly magazine L’Espresso, which printed the full text of a 192-page document with six chapters and two new prayers by Pope Francis dedicated to “the communal home that is planet earth.”

Because the leaked text is not an official Vatican document, we won’t know for sure until Thursday just how close it is to the final product, but a number of major publications, including The Guardian and The New York Times ignored the Vatican’s pleas for restraint and chose to publish extensive excerpts anyway.

If the leaked draft is at all close to the final encyclical, we can expect that, as predicted, Francis comes down on the side of scientists who have concluded climate change is greatly affected by man-made pollution. It starts with the pope’s warning that the earth, “is protesting for the wrong that we are doing to her, because of the irresponsible use and abuse of the goods that God has placed on her.” He argues that people must change their lifestyles and methods of consumption to combat global warming.

No matter what edits made the final cut in the official encyclical—or what, for that matter, motivated the leaking of a religious text—the pope’s emphasis on respect for the environment as a moral issue is what is important.  “It will be a combination of that more rarified genre of the encyclical with some real moments of distinctly Francis rhetoric,” Peppard predicted, which, if the draft is any indication, is right on the mark.

That doesn’t mean the pope or Vatican are looking for a particular policy solution, although Peppard believes the timing of its official release is not by coincidence ahead of his crucial September visit to the United States where he will address the United Nations and Congress in addition to his duties at World Meeting of the Families in Philadelphia and a side trip to Cuba.

[T]he fact that anyone cares what a religious leader says about science is really a testament to the Francis effect and the potential he has to reach the masses.  Of course whether any of that will actually help save the planet is an entirely different matter.