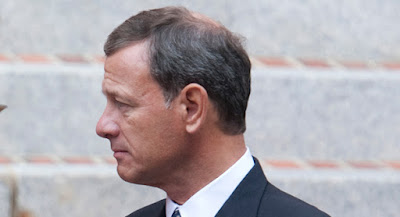 One never knows with absolute certainty how a Supreme Court justice will rule in a case, but there is growing speculation that Chief Justice John Roberts may break with his conservative brethren and vote to uphold the Affordable Health Care Act, a/k/a Obamacare.  Personally, I think Obamacare went nowhere near far enough and support a single payer system - i.e., a national healthcare plan.  Meanwhile, Obamacare is better than the GOP alternative which is no plan at all.  A piece in Mother Jones looks at the consequences of a ruling against Obamacare and why Roberts may opt to uphold the law.  Here are article highlights:

As the end of the Supreme Court term nears, there's a growing anxiety surrounding the fate of the Affordable Care Act—and for good reason. If the court rules for the plaintiffs in the case of King v. Burwell, more than 6 million people could lose their health insurance subsidies, which would likely make their insurance plans unaffordable. National insurance markets could enter a death spiral that would cause many more to lose coverage.

But despite all the legitimate concern, it seems unlikely that the Supreme Court will kill off President Barack Obama's signature health care reform law. And that's largely because of Chief Justice John Roberts Jr.

[T]here are a number of reasons why he's not likely to join his fellow conservatives jurists in knocking down the tax subsidies that now make insurance affordable for millions of people.

The King case is hitting the court late in the game. The previous challenge to the ACA was a fierce ideological battle over a health care law that was still largely hypothetical. Most of its major provisions hadn't yet kicked in, so killing it off didn't seem to have quite the same dire consequences as it would now that the nation's insurance system has been reshaped and millions of people have gained access to care.

This time, the fight over the ACA isn't so much an ideological dispute as it is a financial one. Billions of real dollars currently flowing to insurance companies, hospitals, doctors, and drug companies are at stake in the King case. With that much money involved, the players are also far more powerful and have much more to lose.

The case has pitted big businesses against the tea party, and in that fight, Roberts is much more likely to come down on the side of business.

Overall, the Roberts court is far more business-friendly than any of of its modern predecessors. And Roberts has been a reliable vote for litigants backed by the US Chamber of Commerce, the nation's largest business lobby.

"Chief Justice Roberts has certainly been responsive to the interests and concerns of the business community in his first decade on the Court," says CAC founder Doug Kendall. "In King, all the businesses to weigh in are on the side of the Obama administration."

The nation's multibillion-dollar health insurance industry has also weighed in on the case on the side of the government. So has the Catholic Health Association, the American Hospital Association, and a host of other health care and doctors' groups, who argue that the plaintiffs have completely misinterpreted the law or its history.

On the side of the King plaintiffs? A couple of libertarian think tanks and the tinfoil-hat Association of American Physicians and Surgeons, which has a statement of principles that says it's immoral for doctors to participate in Medicare and Medicaid.

Is establishment lawyer John Roberts really going to side with these guys over a business sector that accounts for nearly 20 percent of US GDP? Probably not.