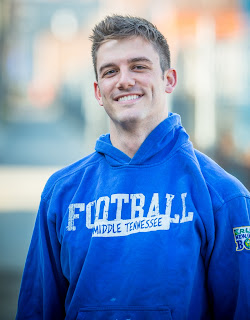 Former Middle Tennessee State placekicker, Alan Gendreauis is openly gay and, as Out Sports reports, he intends to seek a place in the NFL.  Trailblazer or glutton for punishment, whatever the case may be, kudos to Gendreauis for his courage.  It goes without saying it will be interesting to watch his effort.  With recent reports that NFL recruiters tried to question some applicants about their sexual orientation it is certainly possible that Gendreauis could face discrimination regardless of his abilities as a kicker.  Here are highlights from the article:

Now with renewed purpose, Gendreau had made a potentially game-changing decision: It’s time for him to shoot for the stars again.

Gendreau had a record-breaking career at Middle Tennessee State.  With a PAT in his final game as a Blue Raider, he became the all-time leading scorer in Sun Belt Conference history with 295 points. His longest field goal in college, at 55 yards, was the second-longest ever in the conference. That was 12 yards short of the 67-yard field goals he connected on during team practices; it was even shorter than field goals he kicked in high school.

I first met Gendreau four years ago when Outsports ran an anonymous story by sociologist Eric Anderson about the gay kicker. Gendreau was a freshman at MTSU at the time, out to his teammates and embraced by them. He didn’t reveal his name publicly at the time because he feared how it would affect both his family and his shot at the NFL.

Now openly gay and 23, with a deep-seated confidence in his sexual orientation, Gendreau wants another shot at the pros. This time, he wants to do it open and honest about who he is. This time, he wants to give it everything he has.  The Orlando, Fla., native knew he was gay at a very young age. He came out to friends and family at 16, started dating boys in high school and had on-again, off-again relationships with men through college.  "When you know, you know," he said with a smile.

Gendreau has also long been a devout Christian, raised in a deeply religious household. It’s a tough mix, being gay and Christian. When he came out to his parents in high school, they put him in church-based counseling. That lasted four sessions.

While some may worry that his sexual orientation would be questioned during his senior season slump, Davis said the team never considered it.

"I don't think his off-the-field lifestyle was questioned about that," Davis said. "It was more a question, ‘What's up with Gendreau? Why isn't he making kicks? Where is he mentally with his game?’ But I never heard anything about him being gay, it was just questions about why he was missing kicks.

"Football was the business, he was an employee and he did his job well," Davis added. "For people who had a relationship with him outside of football, he's a friendly, funny guy. He was just a normal guy. He was a football player."

There has never been a publicly out gay player in the NFL or Division I college football. Only six NFL players — from Dave Kopay in 1975 to Kwame Harris earlier this year — have come out publicly after retiring.  Many experts have long believed the first gay NFL player wouldn’t be a current athlete who comes out. Instead, he would be openly gay in high school and college and eventually make his way into the pros already out of the closet.  If he can make it to the NFL, Gendreau will fit that mold.

"His sexual orientation is not going to matter one bit," said super agent Leigh Steinberg, who has represented the likes of Hall of Famers Warren Moon, Troy Aikman and Thurman Thomas, among others. "The only thing that matters is if he can put that ball between those goal posts. If he can do that, and if he can do it consistently, he’ll have a shot at the NFL."

Gendreau’s best shot this season will be to secure an invitation to a team’s organized team activities (OTAs) over the next two months. That invitation could come from a team who attends a workout or sees a video highlighting his skills.

The next opportunity is a training camp in late July or August. Each team has two to three kickers at camp who are either competing for a job or, in the case of a team like the Patriots whose kicking position is locked up by Stephen Gostkowski, are competing for reps to showcase their talent to other teams.

In many ways, a place-kicker could be the perfect next step for gay visibility in the NFL. It’s the position on a team furthest removed from other players, not part of the offense or defense, but rather the "special" teams unit. A place-kicker only steps on the field for a handful of plays. Some former football players, like former 12-year offensive lineman and current ESPN personality Mark Schlereth, have long taken potshots at kickers, saying they’re not even football players.


It will be interesting to see how this all plays out.  I wish Gendreauis lots of luck.
Posted by Michael-in-Norfolk at Wednesday, April 24, 2013