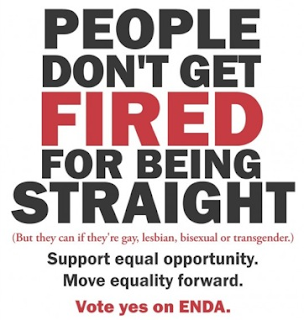 Having lost my job for being gay, the need for passage of the Employment Non-discrimination Act is an issue I am passionate about.  Yet the Christofascists and their political whores in the Republican Party remain steadfastly against any laws that would protect gays for discrimination.  It is all part of the Christofascists' agenda that gays should forever be punished for refusing to live their lives in accordance with the hate and fear - and ignorance - based beliefs that help the Christofascists hang on to their house of cards "world view."  With ENDA reintroduced in Congress, the GOP is once again claiming that ENDA is not needed.   Think Progress has compiled five (5) reasons that gays need no employment non-discrimination protections.  Here are highlights (the first reason underscores why the Christofascists are desperate to maintain the "ex-gay" myth):

The Employment Non-Discrimination Act would protect LGBT Americans from discrimination in the workplace, just like women and racial minorities. This is particularly vital for transgender Americans, 90 percent of whom have experienced workplace discrimination.

While most Americans support the measure — which has been introduced in every Congress since 1994 — opponents have come up with creative excuses to distract from their homophobia. Here are the top five reasons Republicans offered ThinkProgress to explain why they think it should be legal to fire people because of their sexual orientation or gender identity:


1. Being LGBT is a choice. Rep. James Lankford (R-OK), the fifth-ranking House Republican, explained that he opposes workplace discrimination protections for LGBT people because being gay is “a choice issue.”

2. LGBT people aren’t fired for their orientation in the US. Former Rep. Allen West (R-FL) dismissed the idea of a law making it illegal to fire someone for being gay because, as he explained, it’s not “a big issue” and “that don’t happen out here in the United States of America.”

3. LGBT people “already” have legal protections. Rep. Kenny Marchant (R-TX) argued that, contrary to reality, a law making it illegal to discriminate against gay employees is “already on the books.” Marchant, incidentally, voted against that very bill when ENDA came up for a vote in 2007.

4. It could allow LGBT people to sue for discrimination. Sen. Rob Portman (R-OH) refused to support legislation that would make it illegal to fire someone for being gay because it would give LGBT workers “legal rights” that could “spawn a lot of litigation” and “would make it more difficult for employers to feel comfortable.”

5. Anti-LGBT discrimination is not a federal issue. Sen. Mike Lee (R-UT) argued that racial minorities deserved federal discrimination protections, but not LGBT workers. “Should [it] be a federal crime, specific to federal law? No,” said Lee.

The Think Progress piece has video clips of these disingenuous and dishonest statements.
Posted by Michael-in-Norfolk at Friday, April 26, 2013