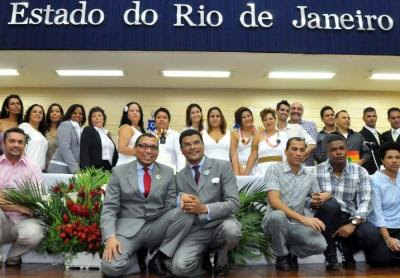 Despite the violence of the Christofascists in France - which is fueled by hate groups like the National Organization for Marriage and its likely financier, the Catholic Church - gay marriage advances continue around the world, particularly in South America.   Last week Uruguay approved full gay marriage and in Columbia, if the legislature fails to act by June 20, 2013, the Supreme Court will usher in gay marriage.  Now, Rio de Janeiro state in Brazil became the 11th state in that nation to grant full gay marriage.  And, unlike in the USA thanks to the bigotry enshrined in DOMA, in Brazil gay marriages performed in any state that allows them are recognized nationwide.  Gay Star News looks at this development.  Here are highlights:

The ruling, published in the state’s official notification a few hours ago today, stated that it found the existing legal provisions [i.e. no marriage equality] unconstitutional and in breach of the Federal Supreme Court’s previous ruling on gay marriage.

The ruling recognizes ‘the stable union between persons the same sex as a family unit, assigning to homosexual cohabitants the same rights and duties arising … as … heterosexual, with immediate … [and] binding effect’.

Will the U. S. Supreme Court have the courage and honesty to rule that bans on gay marriage are unconstitutional or will America lag further and further behind in terms of nations that recognize and support equality and liberty.