GOP and Far Right: Constitutional Rights for Only Some Americans 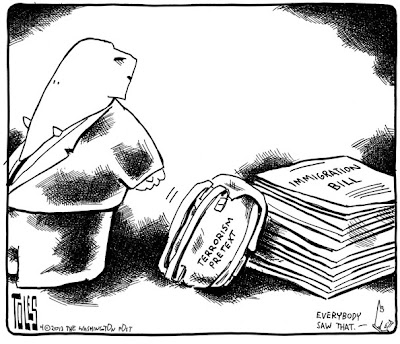 While Phyllis Schlafly was penning her batshitery, a Fox News commentator got to the heart of what the wing nuts and their political whores in the Republican Party really want: limiting full constitutional rights to only some citizens.  Yes, you guessed it.  Limit such rights to white conservative Christians who are "real Americans."  The rest of us, including gays who already have been deprived of equality under the civil laws in most states, would be given whatever scraps are thrown to us.   Media Matters looks at the segment on Fox News where Brian Kilmeade put this agenda on full display.   Fortunately, Fox News legal analyst Peter Johnson, Jr.,  gave much needed push back against this shredding of the U. S. Constitution.  Here are excerpts:

KILMEADE: Although many consider him an enemy, according to the White House, the remaining suspect, the remaining suspect, in the Boston Marathon attack will not be considered an enemy combatant. But will justice now be served anyway and how will the civil liberties be affected? He is now a American citizen. Fox News legal analyst Peter Johnson, Jr. here. Peter: when we talked yesterday, we didn't know what the administration was going to do. Now we know. Not an enemy combatant and he was already Mirandized so the whole public safety issue is out the window. Next thing you know, a high profile defense attorney will be waltzing in here, making a zillion dollars off of him.

KILMEADE: What do we do? We sit there -- F.B.I. Interrogators sit down with him for a week or two until they feel as though they got accurate information.

JOHNSON: Do you believe in indefinite detention of Americans? Because I don't. I don't believe we should detain -- No matter how loathsome, disgusting, vile, contemptible.
KILMEADE: Two different issues.

KILMEADE: Not everyone is worthy of the constitutional rights that we have.

JOHNSON: Senator Graham is an expert on military commission and on the law of war.

JOHNSON: But what he's saying is, let's suspend civil rights and constitutional law.

JOHNSON: In this particular case and then later we'll reinstate it. Now, what if someone decides to do that to Brian Kilmeade, or maybe his family?

KILMEADE: What if? I'm not blowing up the subway! I'm not doing it -- neither is your family.

JOHNSON.: It's not the president's determination nor Senator Graham's nor anyone else other than a U.S. attorney to decide how someone will charged or will they be charged. I believe in the public safety exception. I believe in doing everything we can to get terrorists. But at the same time, I'm saying: don't let the terrorists trample our rights going forward.

Kathleen Parker - who will probably receive threats from the "real American" crowd - gives similar push back to this agenda in a column in the Washington Post.  Here are highlights:

Whom do we hate when the enemy is a composite of our own diverse ecosystem? When “them” is “us?”

Our Boston (alleged) mass murderers were foreign-born, but the younger brother is an U.S. citizen. (The older brother, who died in a police shootout, was a permanent resident.) Given that one in eight U.S. residents is foreign-born, according to the Census Bureau, it is difficult to infer that being born abroad makes one more likely to become an anti-American terrorist.

[T]his is not a comparative religion seminar but an examination of the difficulties ahead as we wrestle acquired biases into submission and resist the urge to demonize groups of people. Discrimination is a life-saving tool in the jungle — steer clear of the hyenas — but it has no place in American jurisprudence. A U.S. citizen gets the full slate of equal rights and responsibilities, including a presumption of innocence, no matter which God he invokes.

Thus, although it is tempting to declare the surviving Boston suspect an “enemy combatant,” as suggested by Sen. Lindsey Graham (R-S.C.), it is essentially a means to deny rights accorded any other citizen who commits a crime. The only justification now would be that the suspect is believed to be Muslim, which isn’t a crime, or that he and his brother may have found inspiration among others of like intent.

Once we begin to discriminate in the assignment of rights to citizens and legal residents based on their thoughts, religious affiliation, assemblage — or our own assumptions — we risk becoming our own worst enemy.

At this juncture, the light-skinned, foreign-born, Muslim-leaning brothers who are suspected of inflicting terror on Boston fit neatly into no category we can define with certainty other than evil, which is, sadly, the unique provenance of the human race. Rooting it out will require more than tighter security or better immigration laws.

Parker is correct.  That doesn't mean her views will sit well with the Christofascists and Tea Party crowd in the GOP base.