Can Obama's Political Network Help Democrats Retake the House in 2014? 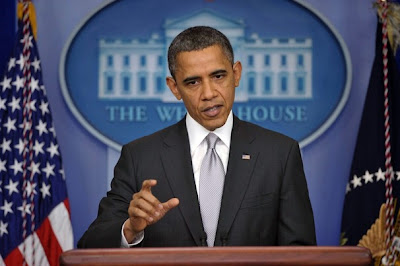 While it could all be a ploy on the part of the GOP to galvanize its theocratic and white supremacist party base, there are some indications that Republicans are actually fearful of the role Obama's Organizing for Action could play in the 2014 elections.   If noting else, it could help keep Democrats and moderates focused on failed GOP policies, especially in races where Republicans may be vulnerable.  Democrat apathy lost the 2009 elections here in Virginia and it is crucial that this year the Democrat base - especially women, gays and minorities - turn out to defeat Ken Cuccinelli's bid to be governor.  The same will hold true in the 2014 midterm elections.  Politico looks at what role Obama's apparatus could play in taking control of the House of Representatives back from the saboteurs in the GOP.  Here are excerpts:

The president’s deep-pocketed political arm, Organizing for Action, can’t by law spend most of its money on elections, and officials insist it won’t play directly in the 2014 midterm. But Republicans aren’t buying it: They’re convinced OFA will find other, indirect ways to help Democrats capture the House and allow Obama to finish his presidency unchecked by Congress.

When the group launched a series of Internet ads in February pressing Congress to pass a gun control bill, the target list looked like a who’s who of vulnerable House Republicans.

While OFA’s plans to solicit big-dollar donations to advance Obama’s agenda have made headlines, its potential role in 2014 has drawn less notice. But Republicans are paying attention.  “We’ll take it seriously. The president is hellbent on taking back the House so he will have no resistance in 2015 and 2016,” said Oregon Rep. Greg Walden, the National Republican Congressional Committee chairman. “It’s all about making Nancy Pelosi speaker again.”

Republicans hold a 17-seat advantage, and handicappers say Democrats have little chance of taking the House. But Republicans say OFA could be a powerful weapon for the opposition.

They have several worries. One is that the not-for-profit OFA, through ads that encourage or discourage lawmakers to vote a particular way, will cast Republican incumbents in an unflattering light. They fear the massive voter database that Obama has built since his 2008 run — now in OFA’s hands — will be deployed on House Democrats’ behalf.

Most troubling of all, Republicans say, is that OFA will use its unlimited donations to keep Democratic voters across the country engaged and motivated to go to the polls. During the last midterm election, when the GOP seized control of the House, Republicans benefited from low Democratic turnout.

Republicans — still picking up the pieces from a disastrous 2012 election — say there’s nothing in their arsenal that can match OFA’s power.

OFA officials say the group will focus on ads pressing for action on White House priorities like immigration reform and gun control. In February, the group purchased Internet banner ads asking 16 House Republicans to crack down on firearm sales. It did not go unnoticed that nearly all of the Republicans are on the Cook Political Report’s list of the most vulnerable GOP members in 2014.

OFA officials argue that it makes sense to focus ads on vulnerable Republicans because their districts have large numbers of Democratic voters and they’re more likely to back White House legislation.  .   .  .   .   .  Republicans say two years of advocacy ads in swing districts could make a difference come November 2014.

Then there’s the issue of OFA’s treasure-trove of voter data, collected over the course of two presidential campaigns. As a tax-exempt 501(c)(4) group, OFA can’t donate data to candidates or national campaign committees. But it can sell it to them at fair-market value, said Paul Ryan, an attorney with the Campaign Legal Center, a political legal watchdog group.

Where OFA might have its biggest impact is in keeping Democratic voters motivated to head to the polls in 2014. To have any hope of netting the 17 seats needed to take back the House, Democrats say they need to bring out many of the young and minority voters who turned out in 2012.

“If OFA energizes and engages voters across this country, including young people, unmarried women and minority voters, in support of the president’s agenda, our campaigns will make sure those voters know where their Republican member of Congress stands when it comes time to vote,” said Jesse Ferguson, the Democratic Congressional Campaign Committee deputy executive director. “We welcome any education and mobilization campaigns like theirs that keep these critical voters engaged.”

I for one hope that OFA keeps up the engagement and I'd love to see it's data base for Virginia help Virginia voters just how important it is to see Cuccinelli defeated along with other puppets of The Family Foundation and Tea Party.