Immigration Reform Could be Bonanza for Democrats 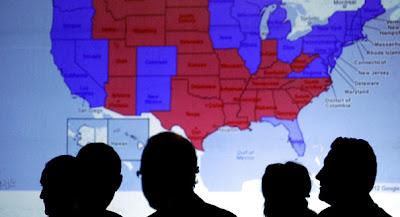 In addition to opposing comprehensive immigration reform out of a desire to pander to the increasingly racist and white supremacist controlled GOP base, Republicans have another reason to oppose reform:  many new citizens are likely to vote Democrat and further dampen the GOP's electoral future.  Rather than evolve on issues and attract a wider range of voters, the GOP seems Hell bent to double down on racism and religious extremism.  An article in Politico looks at why the GOP is so dead set against major reform.  Here are some highlights:

The immigration proposal pending in Congress would transform the nation’s political landscape for a generation or more — pumping as many as 11 million new Hispanic voters into the electorate a decade from now in ways that, if current trends hold, would produce an electoral bonanza for Democrats and cripple Republican prospects in many states they now win easily.

Beneath the philosophical debates about amnesty and border security, there are brass-tacks partisan calculations driving the thinking of lawmakers in both parties over comprehensive immigration reform, which in its current form offers a pathway to citizenship — and full voting rights — for a group of undocumented residents that roughly equals the population of Ohio, the nation’s seventh-largest state.

If these people had been on the voting rolls in 2012 and voted along the   same lines as other Hispanic voters did last fall, President Barack Obama’s relatively narrow victory last fall would have been considerably wider, a POLITICO analysis showed. Key swing states that Obama fought tooth and nail to win — like Florida, Colorado and Nevada — would have been comfortably in his column. And the president would have come very close to winning Arizona.

Republican Mitt Romney, by contrast, would have lost the national popular vote by 7 percentage points, 53 percent to 46 percent, instead of the 4-point margin he lost by in 2012, and would have struggled even to stay competitive in GOP strongholds like Texas, which he won with 57 percent of the vote.

To support the measure virtually guarantees millions of new Democratic voters. But for Republicans to oppose immigration reform invites hostility among Hispanic-Americans who already are punishing the GOP and imperiling its electoral prospects.

This reality, say many Republican strategists, gives the party no long-term alternative but to welcome the new voters and hope this allows the party to compete for Hispanic voters in ways that are closer to how President George W. Bush performed in 2004. National exit polls that year showed he won 44 percent of the Hispanic vote. Some analysts have questioned this data, but there is little doubt that Bush performed significantly better with this group than Romney, who got just 27 percent.


If Republicans do nothing to repair their relationships with current and future Latino voters, “we certainly won’t be a national political party anymore,” said GOP strategist Steve Schmidt, a top adviser to John McCain in 2008.


There's more, so read the entire article, but the highlights make one thing clear: continuing to pander to aging angry white voters and religious extremists is long term suicide for the GOP.  The question thus becomes, how does the party throw off the choke hold of the Christofascists and white supremacists (the two groups often are one and the same).
Posted by Michael-in-Norfolk at Tuesday, April 23, 2013