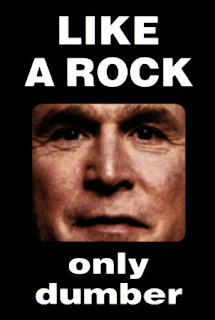 With the opening of his presidential library, George W. Bush, a/k/a the Chimperator, is trying to enhance his legacy and somehow drag his sorry ass from the rankings of one of the worse presidents in American history.  But the man remains delusional and has even said he wants his brother Jeb Bush to run for president, a proposal that his mother squashed immediately recognizing that W has poisoned the Bush name for years to come.  Much of the nations continuing fiscal woes track back directly to the feckless Chimperator and his evil partner in war crimes, Dick Cheney.  A piece in the Washington Post reminds us of what George W. and the Republicans brought to America.  Here are highlights:

[A]nyone tempted to get sentimental should remember the actual record of the man who called himself The Decider. Begin with the indelible stain that one of his worst decisions left on our country’s honor: torture.

Hiding behind the euphemism “enhanced interrogation techniques,” Bush made torture official U.S. policy. Just about every objective observer has agreed with this stark conclusion. The most recent assessment came this month in a 576-page report from a task force of the bipartisan Constitution Project, which stated that “it is indisputable that the United States engaged in the practice of torture.”

We knew about the torture before Bush left office  .   .   .   .  the Constitution Project task force — which included such figures as Asa Hutchinson, who served in high-ranking posts in the Bush administration, and William Sessions, who was FBI director under three presidents — concluded that other forms of torture were used “in many instances” in a manner that was “directly counter to values of the Constitution and our nation.”   .   .   . It may be years before all the facts are known. But the decision to commit torture looks ever more shameful with the passage of time.

Bush’s decision to invade and conquer Iraq also looks, in hindsight, like an even bigger strategic error. Saddam Hussein’s purported weapons of mass destruction still have yet to be found; nearly 5,000 Americans and untold Iraqis sacrificed their lives to eliminate a threat that did not exist.
We knew this, of course, when Obama became president. It’s one of the main reasons he was elected. We knew, too, that Bush’s decision to turn to Iraq diverted focus and resources from Afghanistan.

Bush didn’t pay for his wars. The bills he racked up for military adventures, prescription-drug benefits, the bank bailout and other impulse purchases helped create the fiscal and financial crises he bequeathed to Obama. His profligacy also robbed the Republican Party establishment of small-government credibility, thus helping give birth to the tea party movement. Thanks a lot for that.

As I’ve written before, Bush did an enormous amount of good by making it possible for AIDS sufferers in Africa to receive antiretroviral drug therapy. This literally saved millions of lives and should weigh heavily on one side of the scale when we assess The Decider’s presidency. But the pile on the other side just keeps getting bigger.

Bush and Cheney with the rubber stamp of the GOP controlled Congress did immense damage to America and cost thousands of young American lives in the quest to satiate their hubris.  This is something that must continue to be underscored over and over again.