How The NRA Impeded The Boston Bomber Investigation 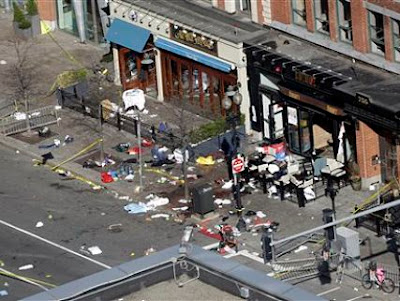 As this blog has noted, despite it's portrayal of itself as the representative of you typical everyday hunter ans sportsman, the NRA is in reality a front organization for gun manufacturers and opposes any and all restrictions on guns.   And as the recent bombings in Boston have helped to expose, even opposes including compounds in explosives which would enable law enforcement officials to trace the origins of gun powder and explosives.  While this policy did not ultimately block the identification of the bombing suspects, in other situations the lack of such tracing capabilities could be critical.  Does the NRA care about safety and identifying terrorists?  Of course not.  It's all about maximizing money for the gun cartel.   An article in National Memo looks at this dangerous policy of the NRA and its political prostitutes in Congress.  Here are excerpts:

The intense hunt for the Boston Marathon bombers illustrates another way that the National Rifle Association helps mass murderers — by delaying how quickly they can be identified.

The inability to quickly track the gunpowders in the Boston bombs is due to government policy designed and promoted by the NRA, which has found a way to transform every massacre associated with weapons into an opportunity for the munitions companies that sustain it to sell more guns, gunpowder and bullets.

But for the NRA-backed policy of not putting identifiers known as taggants in gunpowder, law enforcement could have quickly identified the explosives used to make the bombs, tracking them from manufacture to retail sale. That could well have saved the life of Sean Collier, the 26-year-old MIT police officer who was gunned down Thursday night by the fleeing bomb suspects.

Had the suspects in the Boston bombings killed by slipping poison into bottled water or canned food at a factory, or lacing spinach in a field with a deadly chemical, it would have taken only minutes to a few hours to identify exactly where that food was manufactured and how it moved through the food chain.  That would have quickly narrowed the search for suspects.

Had the Boston bombers used a plastic explosive, it would have included identifiers that would have allowed a quick trace. Those taggants exist because the NRA does not oppose them.  Why is that? Why this breach in the NRA’s Maginot Line of defense against reasonable regulation of guns and ammunition?  The answer appears to lie in who makes plastic explosives like Semtx, which was used to bring down Pan Am Flight 103 over Lockerbie, Scotland, in 1988. The world’s main supplier was not a company that finances the NRA, but Libya under Moammar Khadafy.

That this one breach in NRA policy traces directly to the economic interests of the American munitions industry provides powerful evidence of what motivates the NRA – profits.  That the gun makers have managed to turn each massacre into a spike in sales of both expensive rapid-fire weapons and ammunition adds to the evidence that the NRA should be viewed as the mass-murder lobby.

Bombs have long been used in America for personal, criminal and political purposes. The frequency of bombings may surprise many people given the intense focus on the Boston bombs.  Roughly 5,000 bombings and attempted bombings are reported in the U.S. each year, according to Bureau of Alcohol, Tobacco and Firearms reports.

Hobbling law enforcement, and attacking it, has long been an NRA strategy.

Read the whole piece, but the quoted language makes it clear that the NRA's agenda makes Americans less safe on a daily basis.  Again, the NRA's sole agenda is to maximize gun and ammunition sales for its financial backers.