Why the GOP has to get over Ronald Reagan 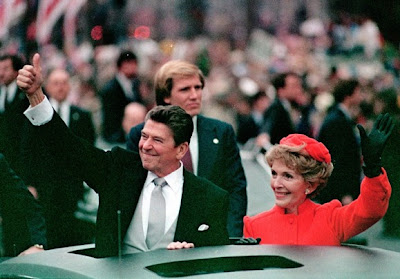 The irony is that given the characteristics - religious fanaticism and extremism in general - of the GOP base, Ronald Reagan could not win the for a state house race much less the nomination for the GOP presidential ticket.  Yet the knuckle draggers of the party base continue to feign worship to Reagan and his ideas.  And never mind that the challenges facing America in 2013 are far different from those back in 1980.  But for a party that claims a base and grassroots that is ever more detached from reality, none of these facts matter.  As noted earlier, the American Unity Fund recognizes that the GOP must change to survive, especially in terms of dropping its open anti-gay animus (even Nancy Reagan supports gay marriage according to her daughter).  A column in the Washington Post likewise makes the case that the GOP needs to face reality, get over Reagan and prepare itself for a far different world than over 30 years ago.   The columnists pleas will go unheeded by the spittle flecked members of the party base, but that fact doesn't make her argument less relevant.  Here are excerpts:

The unfailing reverence on the American right for Ronald Reagan is understandable. He was the only exemplar of modern conservatism to win the White House, and unlike liberal icons such as Roosevelt or Johnson or Obama, he presided over an economic boom and became beloved by voters not normally drawn to his party. No wonder that Reagan, long before his death in 2004, attained mythical status in the conservative movement and the Republican Party.

But that myth has become a burden for the modern GOP. It has bound Reagan’s followers on the right to policies and positions that were time-specific. The old guard has become convinced that Reagan’s solutions to the problems of his time were the essence of conservatism — not simply conservative ideas appropriate for that era.

Today’s Republican Party, however, faces legions of voters and candidates who came of age politically after Reagan’s eight years in office. An entire generation recalls him vaguely as a genial, optimistic president who stood up for America in the Cold War.

The Republican Party can remain a Ronald Reagan historical society, or it can try to endure as a force in national politics. But it can’t do both. The choice matters greatly, for there is no guarantee that the GOP will retain its ability to win national elections or that conservatism has a future as a national governing philosophy.

The Republican Party may survive, but only if its politicians, activists, donors and intellectuals rethink modern conservatism and find new issues to defend and new arguments with which to defend them. The public face of the GOP can no longer be aging, ill-tempered Reaganites such as John McCain and Jim DeMint but must give way to a diverse, media-savvy generation that understands the America we actually live in. Only then can the essence of conservatism — the promotion of personal liberty — survive, and the GOP along with it.

Mitt Romney seemed to be campaigning for the 1980 election, with attacks on welfare recipients and promises of greater defense spending and getting government off our backs.

In the months since Romney’s defeat, there has been a great deal of angst about the party’s future.  .   .  .  .  the problems are more serious than simply who is winning primary races. This is not a matter of individually competent candidates but of the GOP’s outdated worldview.

They confuse the Reagan-era expression of conservatism with conservatism itself. In clinging to it three decades later, the Republican Party has become not conservative but reactionary.

When Sen. DeMint (R-S.C.)decamped in January from Congress to a venerated conservative think tank, the Heritage Foundation, it was not to foster intellectual dialogue, innovation or self-examination. It was to be louder and more resolute on principles that voters had rejected in two national elections. Now DeMint fights innovation on immigration reform, same-sex marriage, economic policy and anything else that could propel the party out of the 1980s. He insists that the GOP’s problem is simply bad marketing.


The fate of the party will be decided in the fight between those few who are determined to revive and rejuvenate conservatism and those who see such efforts as “selling out,” between those who would drag the party into the 21st century and those who would pull it back into the older, white, conservative enclaves that don’t care much for modernity. The new vanguard’s effort to redefine its party is the real story of the post-2012 GOP, and the party’s only hope for survival.

America is no longer Reagan’s America, and the world is no longer fighting the Cold War. A successful political party must not just acknowledge new realities but adjust to them, even embrace them.

[I]in this endeavor Republicans should recognize that America will not return to the pre-New Deal era. Limited government, not small government, must be the aim. That requires low taxes, not taxes that never increase. It requires modest regulation, but some regulation. And it acknowledges that the electorate expects government to solve problems, not merely stand aside.

A modern GOP must also incorporate the national security lessons of the past 30 years, particularly in the wake of the Arab Spring. That means adapting to the new face of jihadism — often radicalized individuals rather than al-Qaeda leaders. It means showing some common sense in intelligence-gathering but understanding that we cannot label every American who goes astray as an enemy combatant.

I generally do not like the op-ed author, Jennifer Rubin, but in her analysis of what the GOP needs to do, she is on target.  Sadly, the party base will ignore her message and perhaps call her a RINO or leave her death threats.  That's how intellectually low and extremist the GOP base has become.  An I say this as a former GOP activist who held a city committee position for 8 years.