Boy Scouts' Gay Ban To Be Dropped For Youth, But Not Adults? 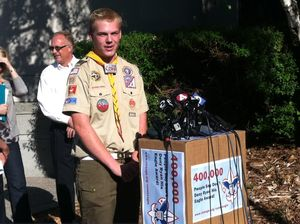 Apparently the leadership of the Boy Scouts of America is floating a proposal to allow gay scouts but with the proviso that they will be promptly thrown out upon reaching adulthood.  As yet, it is unclear at what age expulsion would occur.   Not surprisingly, the proposal doesn't seem to be pleasing anyone.  The Christofascists are incensed.  So are the opponents of anti-gay discrimination.  A piece in Huffington Post looks at the half-assed proposal.  Here are article highlights:

NEW YORK — Searching for compromise on a divisive issue, the Boy Scouts of America is proposing to partially lift its long-standing exclusion of gays – allowing them as youth members but continuing to bar them as adult leaders.

The proposal, unveiled Friday after weeks of private leadership deliberations, will be submitted to the roughly 1,400 voting members of the BSA's National Council during the week of May 20 at a meeting in Texas.

The key part of the resolution says no youth may be denied membership in the Scouts "on the basis of sexual orientation or preference alone." A ban would continue on leadership roles for adults who are openly gay or lesbian.

Gay-rights groups, which had demanded a complete lifting of the ban, criticized the proposal as inadequate.

"What message does this resolution send to the gay Eagle Scout who, as an adult, wants to continue a lifetime of Scouting by becoming a troop leader?" he asked.

Some conservative groups assailed the proposal from the opposite direction, saying the ban should be kept in its entirety.  "The policy is incoherent," said Tony Perkins, president of the Family Research Council. "The proposal says, in essence, that homosexuality is morally acceptable until a boy turns 18 – then, when he comes of age, he's removed from the Scouts."

Indeed, the BSA has anticipated hostile reaction, estimating that easing the ban on gay adults might prompt between 100,000 and 350,000 members to leave the organization, which now has 2.6 million youth members.

In January, the BSA said it was considering a plan to give sponsors of local Scout units the option of admitting gays as both youth members and adult leaders or continuing to exclude them.

"While perspectives and opinions vary significantly, parents, adults in the Scouting community and teens alike tend to agree that youth should not be denied the benefits of Scouting," the statement said.
As a result, the BSA's Executive Committee drafted the compromise resolution.

"The proposed resolution also reinforces that Scouting is a youth program, and any sexual conduct, whether heterosexual or homosexual, by youth of Scouting age is contrary to the virtues of Scouting," the statement said.

In another revealing section of the survey, the BSA reported feedback from 30 national youth organizations and civic groups, many of them partners of the Scouts in various endeavors.
Of the 30 organizations, 28 urged the Scouts to lift the ban, and many warned that their partnerships might end if the ban remained.

The BSA also consulted four experts in the field of child sex abuse prevention. The four conveyed a "nearly universal opinion" within their field that homosexuality is not a risk factor for the sexual abuse of children.

Obviously, the BSA will find itself in a no win situation id it continues to try to please the Christofascist versus the rest of society.  And its membership and donor base will likely continue to erode.